Christmas In Europe Is Under Threat From COVID 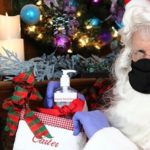 Nearly two years into a global health pandemic that has killed over 5 million people, infections are moving over parts of Western Europe, a region with relatively high vaccination rates and efficient healthcare infrastructure but where lockdown measures are essentially obsolete.
The World Health Organization said that coronavirus mortality in Europe increased by 10% in the previous week, and an agency official claimed last week that the region was “back at the core of the pandemic.” Much of this is due to spiralling outbreaks in Russia and Eastern Europe, where vaccination rates are poor. However, western nations like Germany and the United Kingdom reported some of the highest new case tolls in the world.
While Western European countries all have vaccination rates of more than 60% — and some, like Portugal and Spain, have substantially higher rates – a large section of their people remain unprotected.
According to Dr Bharat Pankhania, a senior clinical lecturer at Exeter University College of Medicine and Health in the United Kingdom, many unvaccinated people, combined with a widespread post-lockdown resumption of socialising and a slight decline in immunity for people who received their shots months ago, is speeding up the rate of infections.
Hospitals in Western Europe are not under as much pressure as earlier in the pandemic, thanks primarily to vaccination, but many are still struggling to manage increased numbers of COVID patients while simultaneously seeking to clear backlogs of testing and procedures with weary or unwell staff. According to statistics from Johns Hopkins University, even the nations suffering the most significant outbreaks in the area had much fewer fatalities per person over the last four weeks than the United States.
The issue today is whether governments can tamp down this recent uptick without resorting to harsh lockdowns that have damaged economies, interrupted schooling, and harmed mental health. Experts say yes, but officials can’t avoid all constraints and must increase vaccination rates.
“I believe the period of incarcerating individuals in their homes is passed because we now have tools to control COVID – testing, vaccinations, and medicines,” Devi Sridhar, head of global public health at the University of Edinburgh, said. “So, I’m hoping people will do what they need to do, like put on a mask.”
COVID passes — evidence of complete vaccination, viral recovery, or a negative test result – are now used in several European nations to enter facilities such as pubs and restaurants. Pankhania cautioned that the passes might provide a false feeling of security since fully vaccinated people can still get infected, even though their odds of dying or becoming very ill are far lower.
However, limitations do not go much farther these days, despite the Dutch government announcing a three-week partial lockdown last Friday.
“We have a terrible message with extremely nasty and far-reaching choices,” interim Prime Minister Mark Rutte said.
Lawmakers in Germany are debating legislation that would pave the path for new policies. Austrian Chancellor Alexander Schallenberg declared on Friday that unvaccinated people in two regions would be allowed to leave their homes only for specific reasons beginning Monday. He is contemplating introducing similar regulations countrywide. However, he has said that he does not wish to impose limits on individuals who have been vaccinated.
Austria, along with Germany, is experiencing one of the most severe outbreaks in Western Europe, with a spate of record-high infections recorded in recent days.
“Right now, we have a true emergency scenario,” said Christian Drosten, chief of virology at Berlin’s Charite Hospital, which has begun cancelling planned procedures.
The ICU at Duesseldorf University Hospital was full last week, while many hospitals are grappling with staff shortages rather than bed capacity.
Drosten believes Germany’s current immunisation rate of 67 per cent must be increased – and quickly. However, administrators have refused to implement vaccination requirements and want to prevent any blanket lockdowns.
Jens Spahn, Germany’s Health Minister, said that the country’s typically weak enforcement of COVID pass standards might be improved.
“If my vaccination certificate is reviewed more often in one day in Rome than it is sometimes in four weeks in Germany,” Spahn recently said.
Cities in Germany, on the other hand, had outdoor Carnival festivities last week. Celebrations in Cologne proceeded, despite designated “Prince” Sven Oleff postponed public appearances after testing positive for Covid-19 the day before the commencement of the festivities on November 11th.
Prime Minister Boris Johnson of the United Kingdom, which eliminated remaining restrictions in July and has experienced large surges as well as reductions in cases after that, argues that the nation can “live with the virus.” He claims that the government would only reimpose limits if the healthcare system is put under “unsustainable” strain.
Spain, formerly one of Europe’s most affected countries, may provide an example of how risks might be managed.
It has vaccinated 80 per cent of its population, and although face masks are no longer required outside, many people still use them. While cases have lately increased significantly, Rafael Bengoa, one of Spain’s foremost public health specialists, believes that “the virus will not be able to conquer us again” because of the high vaccination rate.
Several countries are hopeful that increasing vaccination rates will get them there. Germany is to reopen vaccination centres around the country to expedite booster injections. France is similarly banking on booster doses while pushing those who have yet to get their initial injections to do so. Italy is likewise extending its booster programme as the country’s numbers increase.

What did Elvis and Anne Frank have in common?

Thailand Travel Restrictions And Health And Safety – What Can We Expect Next?