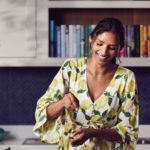 P&O Cruises UK has announced that chef and author Shivi Ramoutar is joining the P&O Cruises culinary line up as a Local Food Hero as part of the launch of the new ship Arvia which joins the fleet in December 2022.
Ramoutar, who is renowned for her contemporary Caribbean cooking, will bring her vibrant dishes to Arvia for its maiden season from homeport Barbados and P&O Cruises UK say she will celebrate her passion for the region’s cuisine with an exclusive collection of dishes at Taste 360 and The Beach House.
As a Local Food Hero Ramoutar will join José Pizarro and Kjartan Skelde in bringing destinations to life through authentic recipes in restaurants on the new Arvia, with P&O Cruises president Paul Ludlow saying, “Shivi’s passion, bold flavour, colourful ingredients and joyful style will bring traditional Caribbean food to our guests”, adding, “As Shivi joins Marco Pierre White and Olly Smith as well as José and Kjartan I am so proud that we have an extraordinary lineup of chefs lending their skills and talents to our dining choice.”
Ramoutar grew up in Trinidad and sealed her reputation for exciting Caribbean cooking through two cookbooks and she is now resident chef on the UK ITV’s Martin & Roman’s Weekend Best and many other television appearances.
Ramoutar said, “Caribbean food is proper fusion food, influenced by all the people who have travelled through the region”, adding, “I hope to make the dining experience on Arvia as much about limin’ (the Caribbean art of relaxing with friends) as it is about the food,” and “The dishes will be my interpretation of the Caribbean flavours which have influenced my life.”
Edited by: John Alwyn-Jones, Cruise Editor.