QF Flights From Australia Direct To FCO Take OffOakwood Premier Melbourne Confirming Its Luxury StatusLongreach Now One Of Australia’s Largest Cruising PortsBeyond Times Square Presents Luxury History Tours in BostonExperts Warn Travellers to Be Vigilant of ScamsSydney is One of the Best Cities for Baby-Boomers to Live in and VisitNEW 15-Day Tour of the Galapagos, Amazon & AndesTravel & tourism deal activity registers marginal growth of 1.4% in May 2022,Qantas To Expand PER Gateway With Flights To JNB And JKTViking Marks Float Out Of Newest Ocean Ship
Adrenaline Tourism Festival -Booni (Upper Chitral), Pakistan - Global Travel Media 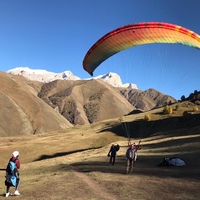 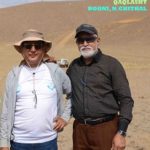 Our Maker has carved the landscape of Pakistan on such a marvel magnitude, words and rhyme struggle to define the superlative creations of Mother Nature in the forms of astronomical mountains rising above deep narrow or broad chasm; isolated glaciated and tranquil alpine lakes abound vast meadows and forests; refreshing turquoise green streams and turbulent rivers meandering down the valley floor; rich soil across the central plains and the mysteries that lay hidden beneath semi-arid and deserted terrestrial; the call of the deep blue waters of the Arabian  seas in the coastal areas– all characterizes an ultimate manifestation of natural wonders
I am geared up with the excitement to attend the First National Paragliding Championship and Culture Show at Booni, a small astounding mountain village in the upper Chitral Valley in the Khyber Pakhoon Khwa (KPK) province – a 12 hour journey from Islamabad, the capital City.
The visionary, Sajjad Hussain Shah: President Pakistan Hanggliding and Paragliding Association (PHPA) demarcated a high place above Booni to become a world class venue to hold International Paragliding Championship. This perspicacity embraced and hosted by the DC Booni took on stage as the first ever National Paragliding Championship, from 30 September to 03 October, 2021.
Among the highlights of the event is the participation of young women including Laraib Zehra (age 14) who began flying at a tender age of 3.5 years.
On Day 1, I along with other participants, drive about 80 kms (1-1/2 hour) towards the high place Qaqlasht (Qaq–Lasht meaning dry-meadows in local khwar language). The broad valley with high saddle and flat meadow field makes a perfect take-off and landing arenas for the pilots. Today is the practice day for the competitors to compete over the next 3 days. 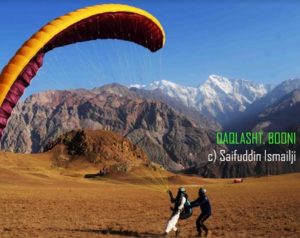 At about 2500 meters, the Stage is all set for a total 72 pilots, dignitaries and visitors. At this spot, I behold stunning views of seven dimensional Booni Zom mountain range. According to the locals, the picturesque virgin Booni Zom peak (6,500 meters) remains unconquered.
The practice session winds up at around 4 PM and we return to Booni for a late lunch/ early evening meal, followed by orientation. 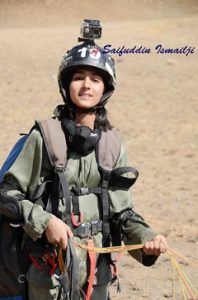 Fore-worded by Federal Minister Omar Ayub Khan, with a passion in flying, also a participant pilot during the 3-Day championship event. His enthusiasm will further promote the event at international level and also help in boosting environmental friendly tourism infrastructure in Chitral. He is optimist that with these activities, our youth can interact in health giving outdoor activities than being glued to mobiles and laptops. The adrenaline event kicks off with keynote address by the host, the DC Booni and followed up with a briefing session by Sajjad Hussain Shah, President PHPA. The competing pilots are cautioned to enjoy the event in a spirit of fun and not focused on the winning. “This event is held as an appetizer for the World Cup next year (2022),” said the PHPA President.
On Day 2, we are escorted in jeeps towards Zani Pass at about 4,000 meters – a 2.5 hours journey high above the valley, past by barren mountains with occasional pockets of small villages that appeared like oases in the desert. 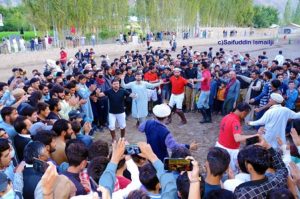 At the top, the Hindukush terrain intermingle with the low altitude Hindu Raj Mountains – off shoots of Hindukush. Tirichmir massifs played hide and seek in the dancing clouds – a magnificent portrayal of the beauty of snow- capped peaks in different moods. Chitral is still the best kept secret for mountain lovers. The lower and upper valleys showcases the largest concentration of highest peaks along the Hindukush mountain range with some fourteen mountain systems rising over 7,000 meters and more than 40 peaks rising above 6,000 meters. Led by Tirichmir massifs, consisting of 6 peaks, the highest is the ice capped Tirich Mir peak, soaring 7,708 meters in the sky.
The weather condition appeared favorable, with occasional fast wind, and the pilots open up their wings to glide about 40 kms. track Cross County (XC) take off. Some pilots enjoyed thermaling through the track. Almost everyone, with a few exceptions, made safe landing on spot at Qaqlasht. The day concluded over late evening supper at Al-Bustan Restaurant – the newly opened restaurant serving palatable menu with a natural hospitality smile. 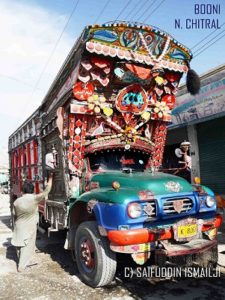 Day 3, we drive to Qaqlasht for three rounds of Accuracy Landing competition, each pilot. Many made perfect landing, notably the three ladies. Little Laraib Zehra and her sister, Dua-e-Zehra – both landed on foot and so did Sana Jan. Some landed on bulls-eye and a few crash landed. Motorized gliders also circled around in their flying machines. At Mid-Day, sand storm kicked off the ground and the competition was halted for the next day.
Our host had arranged an extravagant cultural show including polo matches.   Polo is played at Booni since time immemorial and the players at the field vouched their passion for the game. The King of Sports was first invented in Persia and had been played as a training exercise for the military before confronting a battle. The British introduced Polo in the Sub-Continent. At the end of the game, traditional music and dance were performed by the locals to enthuse the joviality in the fondness of the sport. 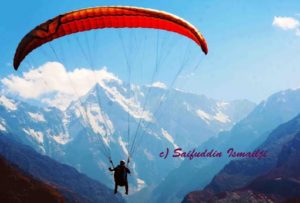 On the concluding Day 4, we are back to Qaqlasht valley for the final rounds of Accuracy Landing competition. The festive event wrapped up around mid-day with the closing ceremony and prize distribution, graced by the Federal Minister, Omar Ayub Khan and attended by dignitaries from Chitral with a gathering of local people.
Content/ Pictures By Saifuddin Ismailji (Founder: e-Travelers Club travel update) 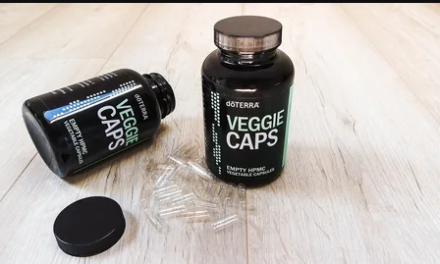