Historical Book Illustrates the Exploration and Cartography of Western Australia

In Dr. John Spencer’s newly released book, “The Intrepids of Albany: Filling in Some Historical Gaps,” he educates readers on the geography, cartography and explorations of what is now called King George Sound, Oyster Bay, The Kalgan River and the surrounding river systems.

“The Intrepids of Albany” commences with the visit in 1621 of Pieter Nuyts, a Dutchman who was blown off course by the relentless roaring forties gales. Throughout the book, Dr. Spencer describes the increasing territorial conflicts between the French and the English and how Napoleon became involved by commanding Nicholas Baudin to claim France’s territory. In addition, the author thoroughly explains George Vancouver and Matthew Flinders’s involvement and the role they played with Nicholas Baudin, Louis de Freycinet, Jules Dumont d’Urville and Antonine Bruni 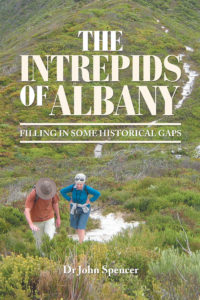 D’Entrecasteaux and their regions. Readers will gain local knowledge of equal relevance to early Australian history as James Cook was to the Eastern regions.

“I wrote this book to provide an area of knowledge that a lot of people are unaware of,” said Dr. Spencer. “Readers will see that these voyages and discoveries were made serendipitously. I hope my book will draw attention to the little-known explorers of the great Southwest region of Australia and the intrepid travelers whose names are on maps and geographical places.”

Readers will also learn about Edward John Eyre and his near fatal trek across the Bight, after whom is named Lake Eyre and the Eyre Highway. Additionally, Dr. Spencer highlights that Albany was Charles Darwin and the Beagles last port of call before returning to Europe.

Ultimately, “The Intrepids of Albany” will spark the historical curiosity of many readers. The book shines a light on these infamous travelers and attempts to humanize them as early visitors to Albany and the Great Southern region. By the end of the book, Dr. Spencer will help fill in gaps regarding some of Australia’s historical treasures.

“The Intrepids of Albany: Filling in Some Historical Gaps”

Clarks lost its footing way before COVID-19 as it lacks adaptability, says GlobalData

Listen Out brings big crowds to the Brisbane Showgrounds

Plan well and shop smart to save fresh food this Christmas