Carnival Australia has this week demonstrated a degree of confidence that cruising might restart soon by hosting hundreds of travel agents on a tour of the brand spanking new state-of-the-art Brisbane International Cruise Terminal with Carnival Australia Sture Myrmell and Port of Brisbane Chief Executive Roy Cummins leading the group. 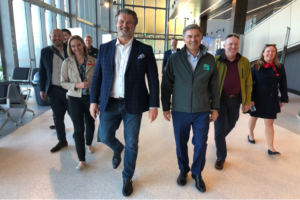 The cruise terminal project, which was underwritten by Carnival Australia, gives Brisbane Australia’s newest purpose-built facility poised to become a vital part of the resumption of cruising and the rebuilding of the tourism economy.

Myrmell thanked the Port of Brisbane for facilitating the agents’ preview of the terminal and expressed confidence that cruising would resume and help deliver brighter days for the dedicated travel agent community”, adding,  “Our travel agent partners were extremely important to our business and to cruising as a whole before the pandemic,” and “You are just as important to us now and we are especially grateful for what you have done in keeping the faith for the return of cruising”, adding “Our travel agent partners will be even more important to us when our ships begin to sail again.”

Myrmell said Carnival Australia’s cruise lines had been building for the future during the pause in operations knowing that there was a deep reservoir of pent up demand for cruise holidays and that the cruise lines were committed to being part of the revival of the travel and tourism sector, which had been so hard hit by the pandemic.

Myrmell said it was inconceivable that federal and state governments would lightly dismiss an industry that contributed more than $5 billion annually to national, state, and regional economies particularly in Queensland, saying, “Cruising has made it to the other side in other international markets and it will do so here as well.”

He said, “Globally, seven of Carnival Corporation’s nine brands are either already sailing again or are soon to do so.” adding, “Cruising has resumed in Britain, Europe and in Asia and is about to restart in the US”, adding, “Hundreds of thousands of guests have already sailed on cruises in various parts of the world without incident and, as the vaccination rollout continues to grow here, confidence in travel will also grow with it.”  “There is every reason for optimism.”

When is East Asia Reopening?

Aussies Gear Up For Change! Will You Explore Your Backyard This Festive Season?