One of the most illogical appliances CHOICE has tested

CHOICE experts have put Breville’s FoodCycler to the test, and declared it to be one of the most illogical appliances CHOICE has seen in our labs.

“The FoodCycler is a food disposal system that pulverises and dehydrates your food waste, turning it into odourless chips which can be put into your bin or garden,” says CHOICE kitchen expert, Fiona Mair.

The Breville website also praises the FoodCycler for its low energy usage, but CHOICE found this statement to be untrue. Breville has introduced an energy-consuming product to what is ordinarily a simple process – composting.

“If you’re someone who is environmentally conscious and looking for an easy way to compost your food scraps, this is one of the poorest choices you could make. Each cycle takes about 4 to 8 hours, and due to the device’s small capacity you can really only fit about one meal’s worth of scraps in there at a time. This means that there are significant running costs associated with the FoodCycler,” says Mair.

“Our performance tests found that if you ran the unit 7 times a week, it would cost you $86 a year in energy running costs. You also need to replace the filters every 3 to 4 months, which adds up to $159.80 a year. The separate bucket lid carbon filter needs to be replaced every 6 months, at a cost of $63.20 per year. The total running costs for the FoodCycler add up to over $300 a year,” says Mair.

“Any benefits for the environment that you’re producing through using this device are really lessened by the electricity costs, and the contribution you’re making to landfill with the replacement filters,” says Mair. 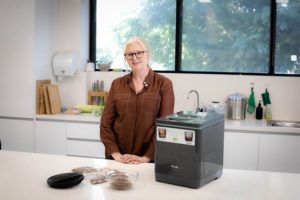 CHOICE also found that while the FoodCycler is running it intermittently emits an irritating, high-pitched sound.

“The sound the FoodCycler produces while it’s running was so annoying that we had to move it out of the kitchen lab while we were waiting for the cycle to finish. You just can’t deal with a noise like that for the 4 to 8 hours it takes to get through a cycle,” says Mair.

“Finally, the “eco chips” this machine produces have huge limitations. You have to wait 90 days before using the “eco chips” on soil you grow food in to minimise potential health risks according to Breville’s instructions. Unlike simple composting, you need to keep the output of the FoodCycler around for three months in some cases before they’re useful.”

At Home and On The Road, RACV Wishes You A Safe Holiday Season