Bites and Stings: The Price of SummerFees halved by Australia’s only travel advisory program for small ship cruisingIT&CM Asia and CTW Asia-Pacific Returns To BangkokHats off! Aussie headwear brand, ooGee, releases crush-resistant range of stylish, travel-friendly hatsHow increased web conversion of their paid traffic by 31% in 2 monthsP&O Cruises Australia’s Historic Encounter in Trieste, ItalyEscape this year at Sir Richard Branson’s luxury mountain chaletInternational tourists back, but rebuild will take timeTravel tech: What is it? How is it changing the world?Travel Industry Bouncing Back:
Motown Records Artists Come Together to Commemorate the 100th Anniversary of the 1921 Tulsa Race Massacre in Oklahoma - Global Travel Media

Between May 31 and June 1, 1921, the community of Greenwood in Tulsa, Oklahoma was home to one of the single worst incidents of racial violence in the USA. The devastating incident would injure 800, send 35 blocks up in flames, and take over 300 lives. It would become known as the 1921 Tulsa Race Massacre.

Now, 100 years later, on the eve of the massacre’s anniversary, iconic U.S. record label Motown Records has assembled a team of Oklahoma born hip-hop artists and performers to release “Fire in Little Africa”, a collection of 21 songs designed to remind today’s generations of the horrific events that unfolded in Greenwood in 1921.

The album, recorded over five days in a purpose-built studio in Tulsa’s Greenwood Cultural Center and a number of other regions around Tulsa including the home of former KKK leader Tate Brady, will be released on May 28 in collaboration with two other Tulsa music institutions – the Woody Guthrie Center, and the new Bob Dylan Center, scheduled to open May 10, 2022 in Greenwood.

About the Tulsa Race Massacre:

The Tulsa Race Massacre commenced on May 31, 1921 – the day after young black man, Dick Rowland was accused of raping a white woman named Sarah Page. After a white mob – spearheaded by Tate Brady – descended on the courthouse demanding that Rowland be turned over to them, 25 black men came to offer Rowland their support. The group were turned away, but returned later that night as a group of 75, only to be met by over 1500 armed white men, who would spend the next two days looting and burning the predominately black area of Greenwood until the armed guard was brought in to stop the massacre on June 1, 1921.

Sadly, it has taken almost 100 years for the events of the Tulsa Race Massacre to gain the public awareness that this unfathomable tragedy warrants. For many years the incident was omitted from public records, or severely under-represented, with many official documents suggesting the death rate was far lower than the 300 lives that are now believed to have been lost during the 2-day racial fueled massacre. Recently however, the events of the Tulsa Race Massacre have been referenced in shows such as HBO’s Emmy Award winning series Watchmen, and the “Fire in Little Africa” album seeks to further the awareness. 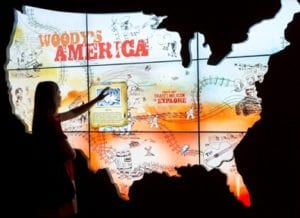 Later this year, another step will be taken in expanding the knowledge of Greenwood and the Tulsa Race Massacre with the opening of Greenwood Rising – a new state-of-the-art museum and centre featuring the events of 1921, the racial tensions that led to the massacre, and the legacy and aftermath of the events, right up to today.  Greenwood Rising will become a must-visit experience for those travelling to Oklahoma when it opens later in 2021, as it seeks to educate local and international communities of the atrocities of racial fueled violence to build consciousness, understanding, and equality.

In addition to further expanding the awareness of the Tulsa Race Massacre, the new “Fire in Little Africa” album is set to showcase just some of the extraordinarily diverse talents of Oklahoma’s music industry.  The album will feature some of Oklahoma’s local hip-hop artists, who continue to pay homage to the State they call home.

These incredibly talented artists are just some of the phenomenal musicians who have called Oklahoma home at some stage in their career.  In fact, in Tulsa alone, travellers can learn more about two of the USA’s most notable music talents:  Bob Dylan, and Woody Guthrie.

At the Woody Guthrie Center, visitors are offered a glimpse into the life of one of America’s greatest folksingers.  Most famous for writing the hit “This Land Is Your Land”, Woody Guthrie was a prolific singer and songwriter who was a passionate advocate for human rights and democracy.  The museum features several interactive exhibits, photography, music, and documentaries to explore the life of one of Oklahoma’s most famous musicians.

And in May 2022, the Woody Guthrie Center will welcome a new neighbour with the arrival of the Bob Dylan Center.  As the primary public venue for The Bob Dylan Archive® collection, the new center will curate and exhibit a priceless collection of more than 100,000 items spanning Dylan’s career including manuscripts, notebooks, instruments, and recordings.

End to US covid-test brake fantastic news for Aussies

Where Did American Barbecue Originate? Why Virginia, of Course!