In the light of a pandemic-related total revenue loss of $16 billion, Qantas will slash travel agent commissions from 5% to 1% – a move that drew immediate condemnation from AFTA.

In an update to shareholders, Qantas reiterated its recovery was largely dependent on the rollout of vaccines against Covid-19.

The carrier stated: “As part of reducing its costs of sale, Qantas will lower front-end commissions paid to travel agents on international tickets from 5% to 1%. The change won’t take effect until July 2022, giving time for the industry to adapt. Travel agents remain an important partner and Qantas will work them on broader revenue opportunities, particularly through technology.”

The Australian Federation of Travel Agents (AFTA) said it was “very disappointed” by the move.

In a statement issued yesterday afternoon, AFTA said it had made “strong representations to Qantas on the pressing need to maintain the status quo given travel agents’ primary revenue reliance on international travel and the reality that international travel is unlikely to normalise before mid-2022 at the earliest.

“While these representations have resulted in Qantas providing a one-year lead-in to the reduced commission structure, AFTA and our members are very disappointed and hope that Qantas will work with AFTA to minimise the impact including through optimising agent benefits on QDP.”

“It’s true there has been a gradual global transition to reduce BSP payments but that transition happened in a pre-Covid world,” the AFTA board stated.

“The reality of COVID and the ongoing paralysis of international travel until at least mid-2022 puts Australia’s travel agents and businesses in a very difficult position. While we are grateful that Qantas has provided one year’s notice of these changes following strong representations from AFTA, the reality is that the ongoing paralysis of international travel to and from Australia has hit travel agents and businesses extremely hard and this is another unwelcome blow.”

Qantas confirmed that “the total revenue loss for the Group since the start of Covid is now projected to reach $16 billion by the end of FY21 – however the role of domestic travel demand in the Group’s recovery is highlighted by the fact revenue from domestic flying is expected to almost double between the first and second half of this financial year.” 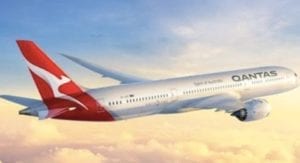 The airline is making further cuts to its international crew, offering voluntary redundancy to hundreds of them. The potential for launching long-range international services has been impacted by the government’s budget assumptions that international borders are unlikely to reopen until well into 2022.

Qantas has forecast a statutory loss before tax of more than $2 billion in the 2021 financial year, though it insists “balance sheet repair” is underway as net debt has peaked and is starting to decline.

IN AN UPDATE ON ITS ‘RECOVERY PROGRAM’ QANTAS SAID:

Of approximately 22,000 roles across the Qantas group, some 16,000 are currently stood up, including all domestic crew, all corporate employees and some international crew.

Qantas said that a sustained domestic recovery was driving strong cash generation. It also pointed to its strong total liquidity position of $4 billion.

Revenue from domestic flying was expected to almost double between the first and second half of this financial year, the carrier stated.

“Assuming no further lockdowns or significant domestic travel restrictions, the Group expects to be Underlying EBITDA positive in the range of $400 – 450 million for FY21. [EBITDA is earnings before interest, taxes, depreciation and amortization.] At a statutory level before tax, the Group is still expecting a loss in excess of $2 billion, which includes the significant costs associated with previously announced redundancies, aircraft write downs and non-cash depreciation charges.”

The three-day lockdown in Perth during April cost the Qantas group an estimated $15 million in EBITDA. This follows the $29 million impact from the Brisbane lockdown in late March and the Sydney (Northern Beaches) outbreak that resulted in an impact of around $400 million in EBITDA for the period.

Corporate travel, including the small business segment, continues to recover and is now at 75% of pre-Covid levels. Leisure demand is growing strongly, with deferred international holidays converting into multiple domestic trips.

“To meet this demand, Qantas and Jetstar have now brought all domestic aircraft back into service. In addition, QantasLink has activated eight (of up to 14) Embraer E190 aircraft as part of its deal with Alliance Airlines. Jetstar is reactivating up to five Boeing 787-8s for domestic use as well as six A320s on loan from Jetstar Japan.”

With the increase in domestic leisure travel demand, Qantas and Jetstar have now announced a total of 38 new routes since July last year.

Travel demand between Australia and New Zealand is rebuilding steadily, Qantas says. Several pauses and additional restrictions from both countries in response to small outbreaks have impacted confidence, leading to capacity being limited to around 60% of pre-Covid levels. “This is expected to gradually normalise, following a similar pattern as key domestic routes.”

All of Qantas’ Boeing 787-9s and about half of its A330 aircraft are active, flying a mix of freight, repatriation and regular passenger services.

Qantas has revised its expectations for the return of a significant level of international flying from end-October 2021 to late December 2021 (except trans-Tasman).

“This is in line with the Australian Government’s revised timeline for effective completion of the national Covid-19 vaccination program, and the Qantas Group is optimistic that the opportunities for additional travel bubbles with other countries will increase significantly from that point. We will continue to liaise with the Australian Government and adjust our planning assumptions as necessary.”

The net cash cost of carrying the international division has improved with the two-way trans-Tasman travel bubble and strong performance from freight, dropping from $5 million per week to around $3 million.

QANTAS LOYALTY has returned to growth, with second half earnings expected to be higher than the first half of FY21 and the prior corresponding period in FY20. Redeeming Qantas Points for domestic and now trans-Tasman flights is increasing in popularity, with redemption levels 85% higher in April 2021 compared to the same month pre-Covid.

“We have a long way still to go in this recovery, but it does feel like we’re slowly starting to turn the corner.

“It’s great to see so many of our people now back at work and the majority of our fleet back in the air. Our recovery strategy of targeting cash-positive flying rather than pre-Covid margins is helping increase activity levels and repair our balance sheet.

“The fact we’re making inroads to the debt we needed to get through this crisis shows the business is now on a more sustainable footing. The main driver is the rebound of domestic travel, which now looks like it will be bigger than it was pre-Covid, at least until international borders re-open.

“Managing costs remains a critical part of our recovery, especially given the revenue we’ve lost and the intensely competitive market we’re in.

“We’ve adjusted our expectations for when international borders will start opening based on the government’s new timeline, but our fundamental assumption remains the same – that once the national vaccine rollout is effectively complete, Australia can and should open up. That’s why we have aligned the date for international flights restarting in earnest with a successful vaccination program.

“No one wants to lose the tremendous success we’ve had at managing Covid but rolling out the vaccine totally changes the equation. The risk then flips to Australia being left behind when countries like the US and UK are getting back to normal.

“Australia has to put the same intensity into the vaccine rollout as we’ve put on lockdowns and restrictions, because only then will we have the confidence to open up.”