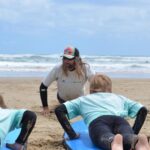 Chris ‘Kingo’ Kingston is opening a new surf camp in Goolwa as surfer numbers continue to swell over winter.

After 10 years teaching people to surf Goolwa waves, PE teacher and passionate surfer ‘Kingo’ is opening the new camp that gives visitors access to lessons along with an array of fishing gear, bikes, kayaks and skateboards.

The new Beach Road accommodation is part of a wider plan to promote more interest from South Australians in coast visits and surf classes as they deal with COVID restrictions into the summer season.

Kingo said more hardcore surfers were already braving the waves in Goolwa over winter this year as they switched from their usual overseas trips to visiting local beaches.

“I think a lot of people have had more time to rethink their lives and they are chasing something different or a new passion and a lot more people are surfing down here,” he said, adding that he also teaches PE at high school but was winding that back to concentrate on the surf school and camps.

In July, he hosted a capacity 15-person group at his second surf camp site in Venus Bay near Port Lincoln on the Eyre Peninsula.

He was hoping for high demand at his business Kingo Surfing from more South Australians looking for new adventures over summer saying it was a “fantastic opportunity” for them to explore some of the state’s pristine coastline.

“Here on the south coast, Goolwa is one of the safest and best learn-to-surf locations in the country,” Kingo said.

The beach faces south so it has swell every day of the year along with a unique environment where sand being pushed into the sea from the Coorong and River Murray mean it is unusually shallow further out to sea than most coastlines.

“And there’s not as many dangerous rips,” he said.

Kingo said it had been a highly unpredictable year with surf classes halted during peak February and March surfing schools then switching to one-on-one classes before class sizes have again increased for summer.

After surfing for more than 30 years and running his surf school since 1998, first in Venus Bay near Port Lincoln, Kingo usually teaches about 300 people over the Christmas season.

Kingo said the focus of his classes was to support people of all abilities rather than only the young and fit to negotiate the waves.

He said the west coast of South Australia where his Venus Bay camp was based had “500km of some of the best surfing coastline in Australia”.

“Surfing is my passion, and I have made it my mission to bring the surfing experience a little bit closer to everybody,” he said.

“I think surfing is a form of meditation, when you are out there in the ocean everything else just washes away, you are living in the moment.”

Passenger charges obese man over $200 for bulging into his space