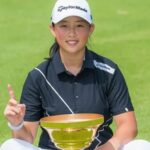 The 17-year-old Shanghai native, winner of January’s China LPGA Tour Qualifying Tournament as an amateur, closed with a six-under 66 for a one-stroke triumph victory over compatriot Du Mohan (66). It was the first regular tournament of the CLPGA Tour season after the Covid-19 virus outbreak.

Yin finished on 11-under 133 at Orient Zhuhai Golf Club in Guangdong Province and had the distinction of completing the 36 holes without a bogey in the tournament that was reduced from 54 holes due to Typhoon Higos, which forced the cancellation of play on Wednesday

Hangzhou native Chen Siyan finished as the top amateur in third after shooting a tournament low eight-under 64 to sit two strokes back. Sichuan veteran Yang Taoli (70) was a distant fourth, six strokes behind the winner.

With a one-stroke lead going into the final round, Yin reeled off three birdies over the front nine and another three on the back side. For her maiden pro win she earned RMB75,000.

“After the long lockdown, I didn’t have much expectation about winning. But after the first round I set a goal to try and play two bogey-free rounds. I did it … and I won,” said Yin, the first player in CLPGA Tour history to win in her first start as a pro.

“Du played great, especially in the middle of the round. She made putts from nearly everywhere and put plenty of pressure on me. At the last hole, I hit a poor chip because I felt nervous. But I made that birdie putt,” added Yin. 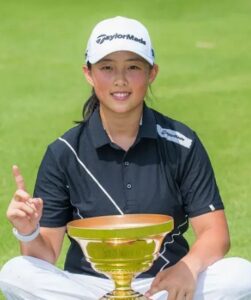 A tearful Du praised playing partner Yin, with whom she had teamed up at the 2018 Asian Games in Indonesia where they helped China to a team bronze.

The 18-year-old Beijinger, who has earned a spot for this year’s US Women’s Open after finishing third in the 2019 CLPGA Tour Order of Merit, carded seven birdies over the first 14 holes to open up a two-stroke lead. However, she was pegged back at the par-four 16th, where she found water en route to a bogey-five. Yin answered with a birdie-three for a two-stroke swing.

“Congratulations to Yin, my teammate. She played really great and deserved this. I played well on the front nine but my long game became worse after the turn,” said Du.

With no signage or scoreboards around the course following the devastation caused by the typhoon, Chen, a 19-year-old University of Illinois sophomore, said she was unaware of how she was standing against the field.

“I didn’t know what was happening. After the round I felt a little bit disappointed in finding out that I was one or two shots behind. But 64 is my career lowest score,” said Chen.