A total of 345 deals were announced in the Asia-Pacific (APAC) region during the week ended 26 April 2020, an increase of 17.7% over the 293 deals announced during the previous week, according to GlobalData, a leading data and analytics company.

An analysis of GlobalData’s Financial Deals Database reveals that the deal volume surpassed the Q1 2020 and March 2020 weekly average levels.

Aurojyoti Bose, Lead Analyst at GlobalData comments: “This is the second consecutive week of growth in deal activity in the APAC region. Deal activity has remained inconsistent since coronavirus (Covid-19) outbreak and the growth in the announcement of deals amidst the volatile market conditions could be an indication of some of the key markets returning back to normalcy.” 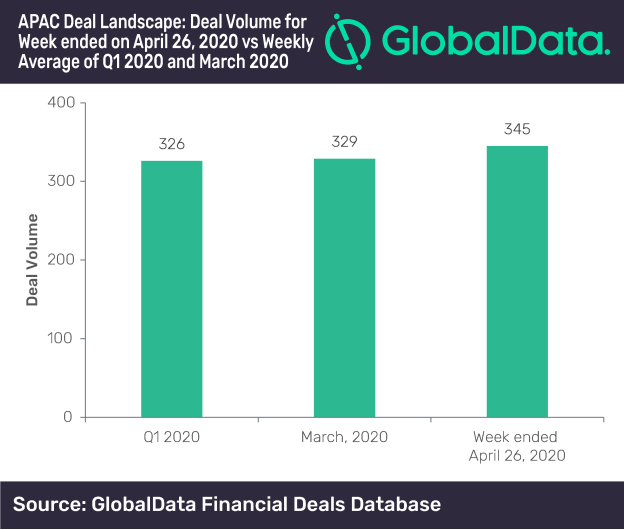 Sectors such as healthcare (including pharmaceuticals and medical equipment) and retail also witnessed improvement in the deal activity during the week ended 26 April 2020 compared to the previous week. However, travel and tourism sector witnessed decline in deal volume.

The volume of key deal types such as mergers and acquisitions (M&A), partnerships, debt offerings and equity offerings increased by 44.9%, 114.3%, 106.7% and 12.5%, respectively, during the reporting period while the volume of private equity and venture financing deals declined by 12.5% and 15.1%, respectively.

COVID-19 Outbreak to Have Significant Economic Impact on Developing Asia