Serene national parks, scenic byways and social-distancing-friendly wide, open spaces still await us in Colorado. Until then, you can experience the natural beauty and Old West spirit of Colorado from home. Be inspired by films set against the state’s iconic mountain backdrop, take a tour of Denver, the Mile High City’s galleries and attractions and marvel at the peaceful parks by webcam.

A dose of Colorado Calm 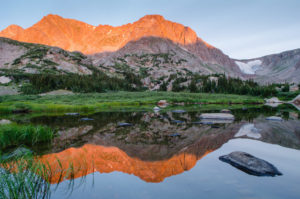 To keep our minds open and our wanderlust fuelled, Colorado Tourism Office has introduced a Daily Dose of Colorado Calm, revealing a new Colorado moment each day through breathtaking video that allows viewers to escape and perhaps picture themselves in the moment. Check out Colorado onTwitter, Facebook, Instagram, and YouTube. #ColoradoCalm

Switch up your soundtrack from rolling news updates to music inspired by the mountains. A Colorado Calm Playlist features tracks synonymous with the state, such as John Denver’s Rocky Mountain High, Johnny Cash’s You Wild Colorado and local singer-songwriter, Gregory Alan Isakov, who toured Australia for the first time last year.

This week marks 50 years of Earth Day. Since our patch of the Earth to roam has become significantly smaller for now, here’s some of the most beautiful examples of natural landscapes in Colorado to appreciate virtually, as research shows that even photographs of nature help ease stress and anxiety: 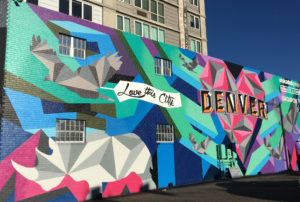 Colorado from the Couch

Searching for what film to watch next? Here’s a sample of blockbusters in which Colorado plays a starring role:

The Hateful Eight
Available to watch on Netflix, Quentin Tarantino’s The Hateful Eight was filmed in the wilderness outside of the Victorian-era hamlet of Telluride, Colorado. The location was an obvious choice for Tarantino to capture the cast on their quest to shelter from blizzard conditions atop a mountain, with Telluride’s annual snowfall average of more than 26 feet and majestic San Juan mountain range.

Whilst filming, the cast and crew were spotted eating at local restaurants like 221 South Oak and Allred’s Restaurant, skating around Telluride’s ice-skating rink, and relaxing in Ridgway at the Orvis Hot Springs.

If watching this film inspires you to pay the secluded ski spot a visit next winter season, drop by the Telluride Elks Park, where Tarantino and actor Samuel L. Jackson took part in a ceremonial burning of skis — a local ritual which takes place each winter to bring more snow. Check out the jaw-dropping scenery in the film now from your armchair, with The Hateful Eight streaming on Netflix. 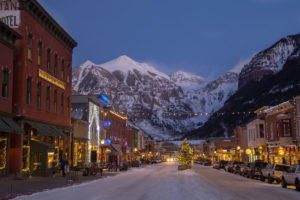 Dumb and Dumber
Though the lovable “Dumb and Dumber” goofballs Lloyd and Harry (Jim Carrey and Jeff Daniels) were portrayed hitting the ski slopes in Aspen, they actually went to the historic mountain town of Breckenridge to film the comedy, which is available to stream on Netflix.

Breckenridge sits at a higher altitude than Aspen, ensuring more snow for the time of filming, with the duo’s arrival scene in fact having them pull up on Main Street, Breckenridge.

Hotel scenes were filmed at the Stanley Hotel in Estes Park – which was transformed into the “Danbury Hotel” – the scene where Lloyd waited only to be stood up by his dream girl took place in the hotel’s Cascades Whiskey Bar. Harry’s meeting with Mary Swanson was filmed at the Copper Mountain Resort, located next to Breckenridge, where the famous scene of him getting his tongue stuck on a chair lift took place.

Most of the transcontinental journey, the highways, fast-food joints and truck stops, were filmed around Fort Morgan on the eastern plains of Colorado. 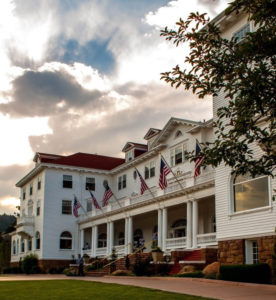 The Stanley Hotel which became The Danbury Hotel for filming. Credit: Nollie Moore.

True Grit
Much of John Wayne’s Oscar-winning western film, True Grit, was set in and around Colorado’s mountain towns Ouray and Ridgway, which still exude the Old West charm that producers set their sights on for the half-a-century old classic movie. Celebrating 50 years in 2020 since its Australian release, a self-guided tour can take fans to locations both in the Western-style towns and to areas further into rural Colorado that were used in the shoot, with free Movie Locations guides available from the Visitors Centre.

Ten miles west of Ridgway on Last Dollar Road are the remains of the ranch of matriarch Mattie Ross (performed by Kim Darby in the movie), where John Wayne’s character, U.S. Marshal ‘Rooster’ Cogburn, jumped his horse over the fence at the end of the film. And to the East sits the aspen-lined valley of Katie’s Meadow – one of the most memorable scenes from True Grit. Other memorable buildings used include Ouray Courthouse for the courthouse scenes, the firehouse now survives as an artist studio, and the livery stable became the post office. After building an appetite, True Grit Café serves up ‘ranch to fork’ dishes to diners as they sit back surrounded by John Wayne memorabilia with views of the San Juan mountains.

And to leave you dreaming, here’s 60 seconds of spectacular Colorado to inspire your next trip as filmed by award-winning photographers Dan and Zora Avila: