W Bali – Seminyak presents M.I.A Special edition on 7 February, featuring Ronnaporn “Neung” Kanivichaporn. Ronnaporn is a former actor, model and television host, but most importantly a young self-taught Thai bartender who starred in the infamous “World Class” cocktail competition. The man behind Bangkok’s coolest bars; Backstage Cocktail Bar and The Locker Room; will be showing off his mad skills by crafting special sunset drinks for the guests from 5PM to 8PM at Woobar for one day only. 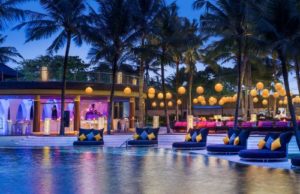 Ronnaporn’s bartending career has skyrocketed in recent years, competing and winning various competitions across the globe. In 2014, being involved in Diageo World Class competition, Ronnaporn took the leap into bartending, participated as a competitor and was crowned champion and represented Thailand at the Global World Class Finals in London.

The BACARDÍ Legacy Cocktail Competition is one of the world’s largest cocktail competitions. Thousands of entries were received during the year-long national rounds that brought forty-three exceptional bartenders to Amsterdam for a week of education and competition. During this time, entrants rubbed shoulders with some of the true legends of the bartending world at some of the city’s finest bar venues and night spots.

Following the success of Backstage Cocktail Bar, Ronnaporn is also now managing two secretive speakeasies with a lot of hype. The locations of both are mysterious and under the radar – one is positioned behind a locker room and the other you enter through a photo booth.

Steal the scene with Ronnaporn at Woobar and start the weekend off right by letting the cocktail do the work for you!

Six Senses Fiji Invites You to Share the Bula Spirit