Why do Airlines offer water as soon as the ‘fasten seatbelts’​ sign is turned off? 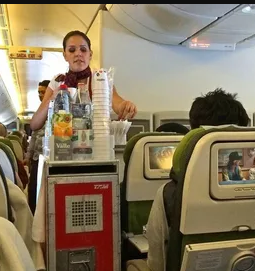 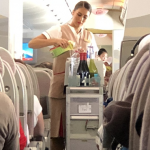 On long-haul flights, water, juice or alcohol is served with lunch and dinner. Usually, meals are served 2 hours after departure, so it’s a long time to wait for a drink of water.

Recently, some airlines are providing bottled water or a drink from the drinks cart earlier, as soon as the ‘fasten seatbelts’ sign is turned off, which might be 30 minutes after departure (or after climbing to 10,000 feet).

Is this practice purely out of concern for the health and well-being of the passengers, to combat dehydration? Or is there some other reason?

The passenger’s ‘dehydration’ starts well before boarding. At the carry-on bag security screening at the airport, bottles of water are confiscated. So a passenger could be thirsty when they board.

The statistics are that perhaps two or three faints a week will occur on an aircraft, to which dehydration is a contributing factor. Airlines advise ‘Keep well hydrated by drinking enough water’.

All this supports the proposition that providing water or drinks early and often is in line with the airline’s concern for the passenger’s health and well-being.

But is there a legal liability reason? In a recent decision of the Supreme Court of Victoria, the facts were that a passenger fainted when entering the toilet, fell and broke her ankle. She claimed a large amount of compensation from the airline (Emirates) for her injury.

She claimed that she had fainted because she was dehydrated because of airline’s failure to provide her with water before the meal (and also after the meal). 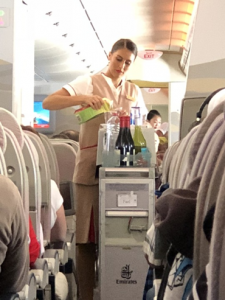 She failed in her claim because the airline (Emirates) was able to satisfactorily explain why it had not supplied her with water when she requested it, and that when the incident occurred (in 2015), it was normal policy to provide water before the first meal.

The last year, when I flew Emirates to Dubai, I noticed a change. The drinks cart came down the aisle as soon as the ‘fasten seatbelts’ sign was turned off. I can only assume that Emirates is now serving drinks early both for the health and well-being of the passengers and to avoid legal liability.

For my summary of the Court’s decision, click on my case note Airlines need to provide water to passengers often to avoid in-flight injuries

Mexico quietly hands its water supply over to transnationals