The traditional driving-in ceremony for the new Captain of The Royal and Ancient Golf Club of St Andrews has taken place on the first tee of the Old Course. 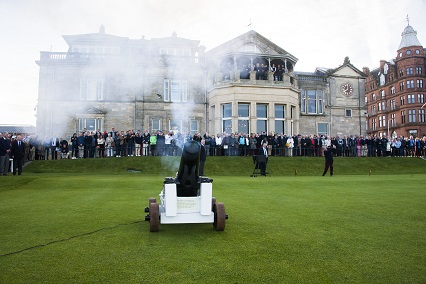 Clive Edginton drives in as the new Captain of The Royal and Ancient Golf Club of St Andrews. Picture by The R&A.

Clive Edginton started his year in office with a drive at precisely 8 am as a cannon fired alongside the tee.

A large crowd including Past Captains of the Club gathered to watch the ceremony.

As Captain of The Royal and Ancient Golf Club of St Andrews, Edginton will serve in an ambassadorial role for The R&A to support its work in developing golf around the world and will attend R&A championships in the professional and amateur game.

After hitting his tee shot, Edginton said: “It is a huge honour to be the Captain of The Royal and Ancient Golf Club of St Andrews and I look forward to representing the Club and The R&A over the coming year.

“It was nice to see so many people around the first tee for this wonderful tradition. I was slightly nervous before the tee shot so I was pleased to make a good contact with the ball and give the caddies a decent shot to follow.”

Born in Walton-on-Thames, Edginton was educated at Malvern College and Oxford University, graduating in 1973 with a degree in law and a Blue for golf. After a successful business career in the City of London, latterly as Chief Executive and then Chairman of Tindall Riley, a specialist insurance management company, he retired in 2014.

He has since been a non-executive director and now consultant to the Medical Defence Union.

Edginton became a member of The Royal and Ancient Golf Club of St Andrews in 1997. He served on the Rules of Golf Committee from 2000 to 2004 and was its Deputy Chairman from 2002 to 2004 when he also sat on the Joint Rules Committee with the United States Golf Association (USGA).

Edginton’s home club is St George’s Hill in Weybridge, Surrey where he became a member at the age of eight. He has served St George’s Hill as Committee Member, Captain, Director and Trustee. He has been Club Champion on four occasions and is a nine-time winner of the club’s scratch Gold Medal.

Aged 67, Edginton currently plays to a handicap of eight. He is married to Debbie, who is a member of both St George’s Hill and The St Rule Club. They have two children, Robert and Claire, and two grandchildren and celebrated their 40th wedding anniversary in July.

In the past, the Club Captaincy was bestowed on the winner of the annual Challenge for the Silver Club but by the early 19th Century the Captaincy had become an elected office. Part of the tradition is that the new Captain buys his golf ball back from the caddie who retrieves and returns it with a gold sovereign.

Iain Barbour successfully returned the ball to Edginton – the first time that the local caddie had participated in the driving-in ceremony.

“This is the first time I have ever taken part in this event and I thoroughly enjoyed it”, said Barbour. “I thought I would stand on the left-hand side of the fairway and it was just pure luck on the day that the ball ended up there. Walking up the fairway to return the ball is something special and I am sure every caddie would love to do it.”

South African Kruger Profits at Korean ‘Home Away From Home’