NH Hotel Group has won the tender to operate the hotel that will be built in the top of the stunning St. Pauli bunker in the city of Hamburg. The building will have 136 rooms, a bar, a café and a restaurant. It is scheduled to open mid-2021. 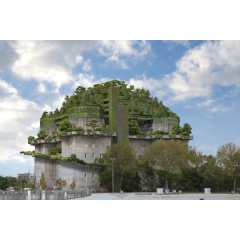 The amazing bunker, right in the heart of the city, will extend over five storeys in the shape of a pyramid, which will house the hotel rooms. One of the project’s most eye-catching features is the landscaping plans: a spectacular roof-top garden, in all likelihood one of a kind in Germany. The hotel will enjoy fantastic panoramic views of Hamburg, in the line of sight of the Elbphilharmonie and a leafy and meandering green walkway that will surround the bunker.

NH Hotel Group remains strategically committed to the nhow concept, as is evident in its pipeline of seven establishments – in the cities of Rome, Brussels, Santiago de Chile, Lima, Amsterdam, Hamburg and Frankfurt – due to open over the next three years. The Group has already opened nhow hotels in Milan, Rotterdam, Berlin and Marseille; the next opening is scheduled for London, in January 2020.

In fact, to welcome nhow to the UK capital, East London was home for a time to an enormous 8-metre long, colourful chameleon, the brand’s spirtit animal. Just a few yards away from the new hotel, on the Truman Tower, the striking chameleon provided the perfect example of the experimental and disruptive spirit that characterises nhow. With its unusual and striking appearance appearance, the chameleon installation will now tour all the cities in which a nhow hotel is being developed.

nhow is NH Hotel Group’s designer and lifestyle brand. All of the nhow hotels have their own personalities, inspired by the cities that embrace them. NH Hotel Group strives to explore new territory with its nhow hotels, which combine the contemporary architecture and designs of famous creators such as Matteo Thun (nhow Milan), Rem Koolhaas (nhow Rotterdam/nhow Amsterdam RAI), Karim Rashid (nhow Berlin) and Teresa Sapey (nhow Marseille) with urban trends. The nhow hotels are style-setters in their respective locations thanks to their eye-catching designs and become fashionable destinations and meeting points for travellers and locals alike.

In devising the design concept for each nhow hotel, NH Hotel Group works with Enrique Tellechea, founder of the branding consultancy The Null, who is working top-down on the brand’s construction. Nothing is given at an nhow hotel. Everything is unexpected, iconic, inspirational and surprising, from the lobbies to the rooms, restaurants, corridors, meeting rooms and creative spaces. Each guest will enjoy their own personal experiences with one thing in common: the wow factor! Located in essential urban districts in the throes of transformation, the nhow hotels quickly emerge as landmarks for self-discovery, experimentation and creativity.