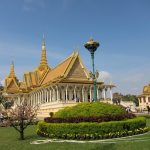 The continuing prosperity of Cambodia points to a country on the rise.  With a sustained annual growth rate of 7.7 percent between 1995 and 2018, Cambodia is among the fastest-growing economies in the world with aspirations to attain upper middle-income status by 2030. Cambodia shows few signs of slowing down.

An outcome of this development is the changes in its demographics: Is senior citizens population is growing.  In 1998 they were a relatively small proportion of the country, just 5.2 per cent or 600,000 people. The UN projects the elderly population to rise to around two million in 2030 up from 1.1 million in 2015. By 2050, one in five Cambodians (21 per cent) is expected to be aged over 60.

The key drivers for this change are found in its political stability and a continuing influx of foreign investment mainly from China followed by South Korea and Japan. This investment is concentrated in construction, tourism and the garment industries as well as real estate, textiles, trade and transport.

Mr Duong Sophak, deputy chief of the Economic Research and International Cooperation Division of the National Bank of Cambodia (NBC), says Cambodia’s growth –a GDP of US$22 billion – will be sustained over the medium term.

Cambodia hosted 6.1 million tourists last year, up 11 percent on the corresponding period.  Some 7 million annually are expected by 2020, and 10 million by 2025 generating
US$5 billion in revenue and providing one million jobs. The majority of visitors are from China, followed by Vietnam, Laos, Thailand and Korea, whose appetite for Cambodia tourism remains strong.

There is a flow down effect of this growth. Legislation has been introduced to further improve the socio-economic development of Cambodia with higher wages, job creation, increased productivity, investment, and better living conditions. Plans also include the location of factories in areas accessible to rural workers aimed at further alleviating poverty that was 13.5% in 2014 compared to 47.8% in 2007. 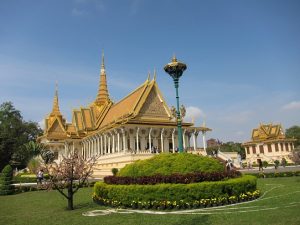 The minimum wage of garment and footwear workers – used as the yardstick for the service and construction sectors – is being negotiated to increase to US$182 per month up from US$170 in 2018 compared to US$40 per month in 1997, and also includes health benefits and insurance.  The flow-on effect has created labour market changes and higher living standards, leading to greater purchasing power within the population.  Older Cambodians have benefited from this by gaining an increase in well-being and family support.

During the past five years 1,500 km of national tarred roads, ports, and railroads have been built as well as improved roads with neighbouring Thailand, Vietnam and Laos and airport infrastructure.

According to Suy Sem, the Minister of Mines and Energy, 83 percent of Cambodia’s 14,139 villages have access to electricity up from 51 percent five years ago.

Construction projects worth US$6.4 billion were completed or underway in 2017, a 131 percent increase on 2013.  The kingdom currently boasts 1,000 high-rise buildings – between five and 54 floors, – compared to a few hundred five years ago, as well as 200 new towns and residential complexes mostly developed in and around the capital Phnom Penh.

The ongoing progress of Cambodia, remarkable as it is, needs to be seen in context.  Between 1970 to 1980 it lost 4 million people to war, famine, genocide and the mass murder of 2,400,000 people by the Khmer Rouge who also pushed Cambodia to ground zero.  Few Cambodians survived to old age.

Peru: Trip through the land of diversity

The world’s whitest sand, or just about as close as you can get to it, JOHN ROZENTALS enjoys some time at Huskisson and Mollymook.