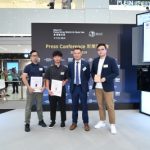 The annual competition was hosted by the HKTDC Hong Kong Watch & Clock Fair 2019 Organising Committee, and co-organised by the Hong Kong Watch Manufacturers Association Ltd and The Federation of Hong Kong Watch Trades & Industries Ltd, with an aim to enhance the design quality of Hong Kong timepieces, discover new talents for the industry and promote the overall development of the watch industry in Hong Kong.

The competition was divided into the Open Group and Student Group, under the respective themes of “Fresh Start New Look” and “Abstract Wonder”. The former theme suggested creating a brighter future for the industry through quality design, while the latter encouraged young designers to bring their limitless imagination into play to create unique watch designs. About 130 entries were received for this year’s competition with a panel of nine judges from various sectors choosing the winning entries through a rigorous selection process.

The design by Tang Chun Kit, Marco, titled “Shuhari”, was named champion in the Open Group. “Shuhari” drew its inspiration from the Japanese martial art kendo, representing the three stages of self-improvement. In kendo, the sword is seen as the soul of the samurai, and the use of the sword element in the watch sought to bring out the theme of breaking through barriers to give the industry a fresh start and new look.

The first runner-up prize was “Reborn” by Lee Cheuk Chung. The design is unique, with the watch surface covered by a three-dimensional skull that matches the domed glass and disc hands. The skull represents rebirth, a symbol for the pursuit of a new life and the interpretation of power.

“Connoisseur” by Tang Siu Hung was named second runner-up. The design utilises a translucent hour plate that allows different details of the mechanical movement to be shown at every moment, creating a unique, minimalistic and intriguing design.

To cultivate new talents in watch and clock design, the competition’s Student Group welcomes students from various Hong Kong institutions. Wong Sze Wa from the Hong Kong Design Institute won the champion prize with her piece “UKIYO-E”, with the abstract waves on the watch face giving a unique appearance under refracted light. The watch makes use of handcrafted techniques using a combination of jewellery and shell designs.

First runner-up went to Cheung Sau Ki from the Hong Kong Design Institute. The key characteristics of her piece “Dream Adventure” come from the use of different-coloured beads, with each colour representing a different kind of energy. The designer believes life is like dreams in that both are unpredictable, wonderful and full of vitality, and she hopes the watch will encourage people to embrace challenges in the future.

Hatti Chan from the Technological and Higher Education Institute of Hong Kong was awarded the second runner-up prize with her piece “Reversed World”. The design is inspired by a reversed image of Hong Kong’s Victoria Harbour. When the light shines on the water, a whole new world is revealed – one that is both mysterious and adorable.

The three winners of the Open Group will attend a five-day study course in Japan, sponsored by the Hong Kong Japan Business Co-operation Committee. In addition, the champions of both the Open Group and Student Group will be sponsored to visit the Baselworld 2020 watch show in Switzerland, while all the winning and final entries will go on display at next week’s Watch & Clock Fair.

The 38th HKTDC Hong Kong Watch & Clock Fair and the seventh Salon de TE will be held from 3 to 7 September at the Hong Kong Convention and Exhibition Centre (HKCEC), gathering more than 840 exhibitors from 21 countries and regions.