Asakusa is one of the most recommended places to see in Tokyo, and for good reason. Home to Sensō-ji, Tokyo’s oldest and most significant Buddhist temple, it’s the place where you can rent a kimono, try traditional foods and explore the historical attractions of the area 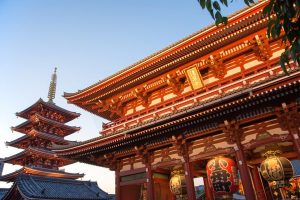 To this day, Asakusa is regarded as one of Tokyo’s most well-known ‘shitamachi’ neighbourhoods which, during the Edo era (1603-1868) was predominantly made up of lower-class citizens including fishermen, craftsmen and merchants.

It’s since become a major entertainment and shopping hub, and its streets continue to overflow with nostalgic culture and character. If Asakusa’s on your list of places to see in Tokyo, here’s how you can spend your time for an extra special cultural experience.

Make your very own Edo Koriko glass as a special keepsake

Once you’ve explored Asakusa’s famous Nakamise Shopping Street and the Kaminarimon gate entrance to Sensō-ji, why not enjoy the “hands on” experience of making your very own ‘Edo Kiriko’ glass.

This traditional type of glassware originated in the early 1800s by master craftsman Kagaya Kyubei. The glasses, which feature beautiful and elaborate patterns etched into the surface have become an affordable yet luxurious item in Japanese households and are often used for serving sake or whisky.

Situated near Asakusa Station, you can participate in the Sokichi Kiriko Workshop where you can design and create your own unique glass to take home as a special souvenir. With a variety of colours to choose from, the Edo Kiroko glass makes for an aesthetically pleasing memento that will remind you of your experience in Japan for many years to come.

One of the most popular past times in Asakusa is to explore the many bars of Hoppy Street, an 80-metre road lined with old-style Japanese bars. ‘Hoppy’ is an alcoholic drink made by mixing hops with Shochu, Japanese alcohol made from fermented potato or barley.

Since the production of Hoppy began in 1948, it quickly gained popularity as a substitute for beer which people couldn’t afford at the time. It is a drink that is loved by Japanese locals and is most popular in downtown Tokyo.

The bars of Hoppy Street have indoor and outdoor seating and their own quaint atmosphere. Each bar also makes its own specialty beef stew ‘nikomi’ which goes perfectly with any drink. Hoppy Street attracts both locals and international tourists alike, all looking for a place to unwind at the end of a long day.

A new major commercial complex is scheduled to be opened in 2020 with numerous dining, retail and experience-based establishments that will allow visitors to enjoy the same downtown charm as they wander the metropolis that is Tokyo.

The complex is being built under the raised railway tracks that connect Asakusa and TOKYO SKYTREE TOWN, another commercial complex which features retail and entertainment establishments including the Sumida Aquarium.

Discover the hidden treasures of Japan: a spectacular cultural legacy, in unity with nature