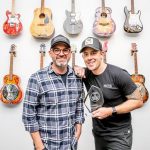 Australia’s fastest growing country music festival, Groundwater, has announced local Gold Coast favourite Casey Barnes as the winner of their inaugural 2019 P&O Cruises People’s Choice Awards. Barnes smashed the competition, receiving more than double the votes than the act who came in second place. Barnes put on some blistering shows across the weekend and this inaugural award is testament to his commitment to country music fans and their mutual respect.

This exciting new initiative was open to the huge crowd of over 73,000 people who came from all of Australia to attend Groundwater last weekend and gave fans the chance to get involved and vote for their favourite artist online.

“Absolutely blown away to hear that we took out Groundwater’s inaugural 2019 P&O Cruises People’s Choice Award for the public’s favourite live act of the festival!” said Casey Barnes.

“There were so many incredible acts on the lineup this year so myself and the band are pretty chuffed. We wanted to bring something special this year so the band and I had been rehearsing a brand new live show for over a month leading up to the festival. I’m just over the moon that it was so well received by everyone that attended our three shows. We pride ourselves on trying to put on a high energy and fun live show so winning this award is pretty special!”

The vote also put fans in the running to win the ultimate holiday for two on board P&O Cruises inaugural Country Music Festival at Sea which sets sail from Brisbane in December 2019. The line-up for P&O’s first country cruise has just been announced and features Casey Barnes, James Blundell and Caitlyn Shadbolt.

P&O Cruises Head of Entertainment Brett Annable said guests would be treated to a spectacular solo show from Casey Barnes.

“We’re thrilled that fans voted Casey Barnes as the winner of the inaugural 2019 P&O Cruises’ People’s Choice Award for the most popular performance and excited to announce the Gold Coast star will be performing live to more than 2000 guests on our first country music festival cruise,” Mr Annable said.

Olivia McLennan from Brisbane has been announced as the lucky winner with her winning entry stating:

“Casey Barnes on the coast! Doesn’t get any better! Had amazing set, amazing crowd, amazing atmosphere! Best possible way to kick off Groundwater 2019!” 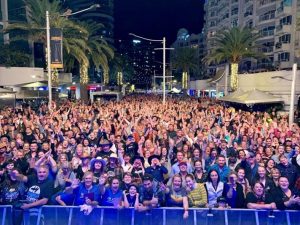 “Groundwater Country Music Festival understands how deeply entrenched our people are to their music, which is why, with our friends at P&O Cruises, we created an award that would give them a voice and a way to express their love for an artist,” said Festival Director Mark Duckworth.

“Not only does Casey Barnes and his band put together amazing performances, but his connection to his fans is something special to watch. This inaugural award is testament to his commitment to country music, its fans, and their mutual respect.”

50 acts performed across 15 stages throughout Groundwater in Broadbeach’s bars, streets, and parks with the stunning beach as the stage backdrop. All live and all FREE!

Gold for Gin From Stuttgart: GINSTR Wins Another Award in London