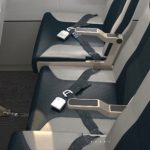 In a claimed breakthrough in airline seating, a seat company has gained official US certification for a middle seat that is wider and set back a little from the two adjacent seats – along with a radical innovation that allows aisle seats to slide along towards the middle, doubling the width of the aisle.

On most aircraft, the middle seat, particularly in a set of three, is widely disliked for its lack of access to the aisle, its lack of a window, its “hemmed in” feeling and its general absence of elbow space – plus the fact it costs just as much as more desirably located seats.

A landmark new American-designed airline seat called the S1 Space Seat staggers the typical three-seat arrangement, so middle-seat passengers sit slightly behind others in their row.

After lengthy, rigorous testing by US federal authorities, the S1 has now gained essential US Federal Aviation Administration (FAA) authorisation, certifying that the seat is safe and suitable for installation on planes – so you may be seeing the seat soon.

An undisclosed US airline will install the new seats, designed by manufacturer Molon Labe Seating, on 50 planes by the end of next year, US website Smart Company reports.

Air New Zealand has already introduced a wider middle seat on its new A321 neo aircraft, though not the Molon Labe design.

The S1 takes it a stage further – but it’s not a long-haul option. The Molon Labe seat is designed for commuter flights lasting a few hours – say Sydney-Melbourne or Melbourne-Brisbane – maybe even trans-Tasman.

The S1 moves the middle seat a little lower and further back from the adjoining aisle and window seats. It lets arms, shoulders, thighs and elbows spread more than they otherwise could – yet it delivers no more legroom. A two-level armrest design gives an elbow rest for all (often a point of in-flight contention).

Molon Labe is still offering its “Side-Slip” design that slides the aisle seat over to create a wider aisle (useful when boarding or departing an aircraft, or moving a wheelchair along the aisle).

The Side-Slip is now an optional extra rather than an integral part of the seat design.

The Side-Slip option is shown below. The aisle seat slides towards the window seat, over the front of the middle seat, creating a wider aisle when boarding or exiting the aircraft. 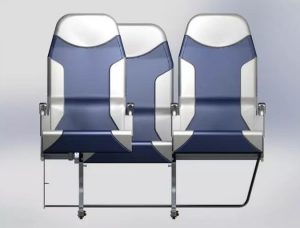 Tips to Help Hotel Operations Survive and Prepare for Recovery