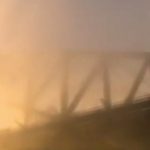 Other than an invasion from outer space, there’s only one thing that can eat Sydney landmarks and disrupt flights, just as people try to head interstate for the weekend.

It happened on Friday. A dense bank of winter fog rolled into Sydney, swathing Sydney Harbour Bridge, obscuring the Opera House and making visibility at the airport so challenging that at least 10 flights were cancelled and many others were delayed.

Meteorologists said visibility at Sydney Airport and across the city dropped to just 200 metres by 7am. They attributed it to a combination of cool temperatures following a clear night and moisture in the air.

At 3pm, Sydney Airport posted on Twitter: “We’re currently experiencing delays due to fog. Please check with your airline for flight status.”

Sydney Airport’s T1 International terminal experienced delays of up to 30 minutes and travellers at the T2 Domestic terminal were held up by up to 45 minutes.

Photos of Sydney icons in swirling fog flashed around the world. 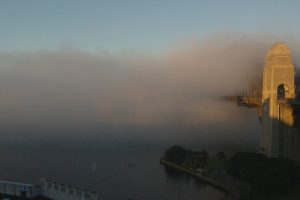 Now you see it, now you don’t

Despite advances in modern tech, landing at airports is still easier when pilots can see the ground and the runway. For instrument landings, runways must be completely clear. That means aircraft need to be more widely spaced, which can cause delays when fog rolls in.

With the arrival of the weekend, bright clear skies returned to Sydney and the fog dissipated. Today is forecast fine and bright, perfect for this afternoon’s Canada Day lunch in Sydney! 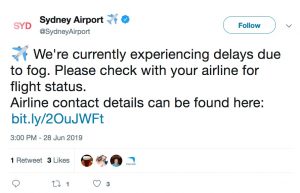 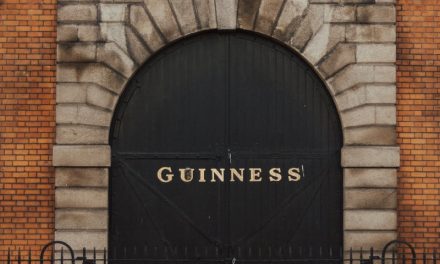 And the most punctual domestic airline in 2018 was… 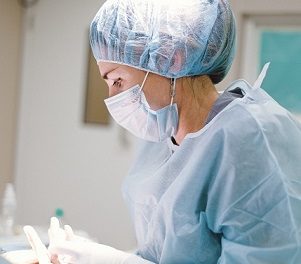