While some are beginning their summer vacation and watching the weather this weekend, much of the nation can expect typical summery conditions, which include intense sunshine, heat and the risk of a thunderstorm for the Fourth of July.

According to AAA, a record-breaking number of Americans, 48.9 million, are expected to travel for Independence Day in 2019, including a record of 41.4 million people who will drive for their holiday getaways. July 3 is expected to be the busiest day for people hitting the road.

The main storm track will be near the Canada border during the first week of July. South of this storm track, summer warmth will be abundant and most thunderstorms will be few and far between.

Most major rivers over the spring flood-ravaged central United States will be on the recession.

Much of the nation can expect highs in the 80s and 90s F. This time of the year, on a sunny day with a high withing a few degrees of 90, AccuWeather RealFeel® Temperatures often peak close to 100. 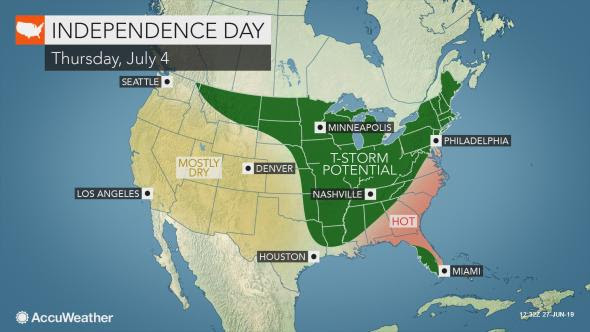 In early July, the nature of thunderstorms is such that they are most likely from the hours spanning 4 p.m. to 10 p.m., local time. This is the part of the day and evening when most people are engaged int outdoor activities on Independence Day.

The early outlook for Independence Day suggests that areas with a chance at being directly affected by or at least have a close call with a brief thunderstorm downpour will expand northward from the lower Mississippi Valley to the Upper Midwest, much of the Northeast and the northern Plains and northern Rockies.

In between thunderstorms this weekend and later next week, heat is forecast to build during the first few days of days of July in the Northeast.