The year 2014 stands out as the 21st century’s worst for commercial aviation because of the loss, in horrendous circumstances, of two Boeing 777 airliners, both belonging to Malaysia Airlines – and this week has seen major developments in getting to the bottom of each of those dreadful disasters.

In the first calamity, the loss of MH370, the plane flew off to oblivion, never to be seen again, quite possibly with a mad pilot at the controls. In the second tragedy, just months later, MH17 was shot out of the sky. The two weird disasters claimed 587 lives.

Here are the new developments:

THE CRASH OF MH17

Dutch prosecutors have named four suspects they will charge with murder over the downing of Malaysia Airlines flight MH17, which was shot down in July 2014 over territory in eastern Ukraine held by pro-Russia separatists.

The crash killed 298 people, including 38 Australians.

The MH17 Joint Investigation Team (JIT), which includes representatives from Australia, Belgium, Malaysia, Ukraine and the Netherlands, yesterday named three Russians – Igor Girkin, Sergei Dubinsky and Oleg Poelatov – as well as Ukrainian Leonid Kharchenko, who will be prosecuted by Dutch authorities in March next year.

The JIT is issuing international arrest warrants and placing the four suspects on national and international wanted lists, although neither Russia nor the Ukraine extradites their own citizens to other countries.

According to the Dutch Public Prosecution Service, the four men cooperated to obtain and deploy the BUK TELAR anti-aircraft missile system that launched the missile at MH17.

Girkin was the most senior of the group and was a former colonel of the FSB, the Russian Federal Security Service.

The trial will start on 9 March 2020 before the District Court of The Hague at the Schiphol Judicial Complex.

Motive has always been a mystery. It is generally assumed that the disaster resulted from some sort of dreadful mistake. Russia has steadfastly denied involvement. It is highly unlikely any of the four men will face the court. 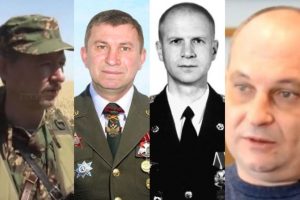 At a press conference on Wednesday, JIT mentioned phone taps, social media tracing and witness statements – adding that it had further evidence, which would be presented to the court.

All kinds of theories about the destruction of MH17 have circulated over the years. A few months after the shoot-down, former Lufthansa pilot Peter Haisenko, a German who writes variously on aviation, economics, history and politics, said he had examined images of MH17 wreckage and come to a disturbing conclusion.

According to Haisenko, an image featured in several magazines, showing a fragment of the MH17 cockpit below the window on the pilot’s side, “shows traces of shelling”, presumably from a fighter aircraft’s machine gun, leaving a series of holes. To see that image click here. For the story, see: Disturbing new theories emerge over MH17 shoot-down

Russia has made similar suggestions, at one point saying a Ukrainian fighter pilot shot the plane down and even naming him.

Russia’s Foreign Ministry hit out yesterday at what it called the latest “absolutely hollow claims” by JIT.

“Once again, absolutely groundless accusations are being made against the Russian side, aimed at discrediting the Russian Federation in the eyes of the international community,” Russia’s Foreign Ministry said in a statement.

One problem is that the tragedy has become politicised. Countries blaming Russia tend to be aligned with the West, such as the US, its staunch ally Australia, plus Britain, EU and NATO countries.

So what does Malaysia say? It was, after all, their plane.

Yesterday, Malaysian Prime Minister Mahathir Mohamad spoke out, condemning the JIT decision to charge the four men as “ridiculous” and part of a political plot against Russia.

“We are very unhappy. From the very beginning, it became a political issue on how to accuse Russia of the wrongdoing,” Mahathir said.

“Even before they examined the case, they have already claimed it (the shooting down of MH17) was done by Russia,” Mahathir told reporters at a Malaysian government function.

Mahathir said the findings do not convince Malaysia. That country’s Star newspaper online reported last night that Mahathir is demanding the investigators provide proof the Russians were behind the shooting.

“As far as we are concerned, we want proof of guilt (that Russia did it). But so far, there is no proof, only hearsay.

“This is a ridiculous thing. Someone shoots a gun and you are not able to see who, but you know who shot,” Mahathir said.

Longstanding suspicions that Malaysia Airlines Captain Zaharie Ahmad Shah was behind the mysterious disappearance of Malaysia Airlines flight MH370 have been strengthened by a report in the US magazine The Atlantic, written by author and professional pilot William Langewiesche.

The disappearance of the MH370 and the 289 people aboard it, on a flight from Kuala Lumpur to Beijing in March 2014, is aviation’s greatest mystery.

Langewiesche’s investigation of Zaharie indicates the pilot was most likely clinically depressed.

Despite numerous theories over the past five years, some of them outlandish (involving aliens, wormholes in space, elaborate conspiracies or the plane being seized by remote control), Captain Zaharie has always been the most likely suspect. A plausible scenario is that he took total control of the plane, probably by sending his co-pilot out of the cockpit on some errand or pretext.

Zaharie may then have depressurised the plane to kill the passengers and crew and set a course for the Southern Indian Ocean.

It is generally suspected that only the pilot or co-pilot could have done it.

“It is difficult to see the co-pilot as the perpetrator,” Langewiesche writes. “He was young and optimistic, and reportedly planning to get married. He had no history of any sort of trouble, dissent, or doubts.”

Zaharie, in contrast, is thought by investigators in the aviation and intelligence communities to have been clinically depressed at the time of the crash.

“The truth, as I discovered after speaking in Kuala Lumpur with people who knew him or knew about him, is that Zaharie was often lonely and sad,” Langewiesche writes.

“His wife had moved out, and was living in the family’s second house.

“By his own admission to friends, he spent a lot of time pacing empty rooms waiting for the days between flights to go by.”

Zaharie’s obsession with two young internet models has already been revealed and Langewiesche reiterates it. His investigation can be read online in The Atlantic here.

While certified pieces of debris from the doomed plane have washed up in the Indian ocean, an extensive search has failed to find the main body of the aircraft.

Relatives of the MH370 victims continue to urge the Malaysian government to resume searching.

Issues crawling as Australia plans on reopening borders by Christmas

Travel Bubble with Japan And South Korea To Start Soon