The coconut island of Koh Samui is about to enjoy the culinary skills of a guest chef from Fiji who brings 18 years’ mastery of cooking South Pacific fare. 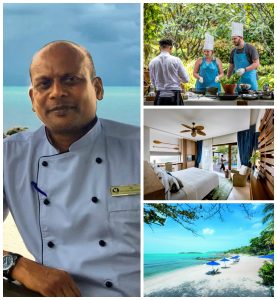 By the end of the month, visitors to the Outrigger will have the option of two or three signature Fijian special dishes, in addition to the resort’s acclaimed range of Thai and international options.

Shailesh is most proud of his Indo-Fijian curries. “It’s been 140 years since the first Indians arrived in Fiji. Spices are still very highly used in Indo-Fijian kitchens. I enjoy cooking curries with aromatic flavours with my coach and critic [and wife] Rita, beside me.”

There are culinary parallels with Koh Samui. “I also love making seafood slow cooked in coconut milk with tropical island flavours such as lime, chilies, coriander and coconut as the main ingredients.”

He has been to Thailand before and admires Thai food. “It’s world renowned and highly regarded. It’s one of my favourite cuisines as the ingredients are the same or very similar to the food I grew up with.”

Shailesh says he’s also ready for the cultural challenges of working in Thailand where ‘greng jai’ [deference] and ‘my pen rai’ [never mind] are workplace realities.

“I come from a similar background with ‘greng jai’. In Fiji people are very humble to speak out. They are often too nice to say ‘no’.”

He believes ‘my pen rai’ won’t be a problem either. “It’s like we Pacific islanders say, ‘Set, no worries,’ or ‘It’s OK bro.’ So I’m sure I’ll be in the same boat as my Thai brothers and sisters.”

While adding a few Fijian special dishes over the next six months, Outrigger Koh Samui Beach Resort will continue its popular Thai cooking classes at its Blue Fire cooking school. The resort also recently introduced 16 in-resort activities – many of them food and beverage related – for guests.

Do Small Things With Great Love

Say “Yes” On The Piano Deck At Baros Maldives