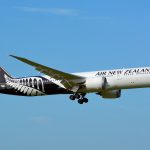 A bright flash, followed by “huge, loud bang and a shake” rocked an Air New Zealand B787-9 Dreamliner on Friday as a bolt of lightning slammed into the aircraft, leading the captain to dump fuel and turn back just 10 minutes into the flight.

Passengers aboard Air New Zealand flight NZ42 were shaken but not stirred, saying the captain and crew handled it all professionally.

The plane had taken off from Auckland for Tahiti on Friday evening, about an hour late. It turned back to Auckland after the lightning strike.

@airnewzealand flight NZ42 dumping fuel as we return to Auckland after being hit by lightning. Pilot was calm and professional handling the situation. pic.twitter.com/H3MVi4Kli3

An Air NZ spokeswoman confirmed to the New Zealand Herald that lightning strikes were not uncommon; planes were designed for it and pilots trained for it.

Engineers inspected the aircraft at Auckland Airport and passengers were accommodated overnight before flying out 24 hours later.

While lightning strike on aircraft is not too unusual –a Dreamliner handles it differently. Advanced composites are used extensively throughout the plane, combining high strength with light weight. More than half of the Boeing 787 Dreamliner is made of carbon fibre reinforced plastic (CFRP). 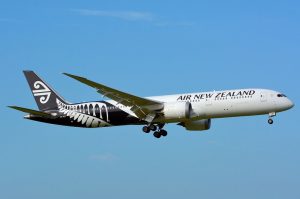 Unlike aluminium, composites are generally not conductive to electricity. That could make CFRP susceptible to lightning strike damage – but Boeing foresaw all that and added electrically conductive expanded metal foil (EMF) to the Dreamliner’s composite structure. It safely dissipates the high current and heat generated by a lightning strike.

Written by Peter Needham in Auckland

Can I Climb the Seven Summits During the Delta Variant?