An active wildfire season and worsening drought conditions are likely to unfold across western and central Canada this summer, as a very warm and dry weather pattern dominates the region.

Predominantly warm and dry conditions are in the forecast for much of Atlantic Canada, while a wet summer may bring the risk of flooding and severe thunderstorms to much of Ontario. 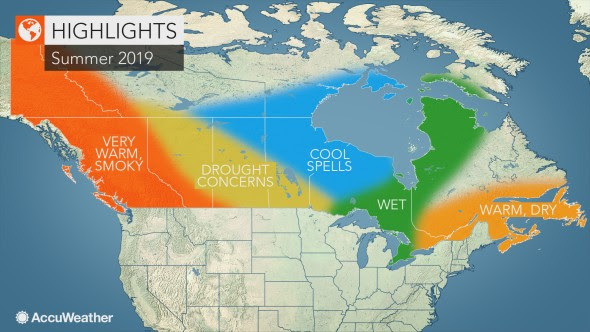 Residents across British Columbia and the Yukon Territory can expect this summer to feature long stretches of unusually warm and dry weather with temperatures occasionally challenging record levels.

This may set the stage for large wildfires to erupt across the region that could have far-reaching impacts.

“This [pattern] is likely to lead to an active wildfire season in this region, with a higher probability of large fires that burn tremendous amounts of land area,” AccuWeather Senior Meteorologist Brett Anderson said.

As more and more wildfires spark and spread, smoke billowing from the blazes will gradually disperse across British Columbia, the Rockies and the western Prairies, especially during the second half of the summer.

“Smoke from large wildfires in the north may become a health issue at times across southern British Columbia and southwestern Alberta,” Anderson said. “This includes places such as Vancouver, Edmonton and Calgary.”

In Canada, lightning causes around 50 percent of all wildfires, according to National Resources Canada. However, fires that are sparked by lightning strikes are responsible for 85 percent of all of the acres burned across the country.

While heat remains entrenched across western Canada, the water off the coast of British Columbia is also expected to be warmer than normal throughout the summer.

“Water temperatures are expected to remain above normal along coastal British Columbia this summer, which may result in a higher population of salmon,” Anderson said.

This could be a boon for the fishing industry across the region.

Extreme drought may develop in the Canadian Prairies

Drought has been a growing concern across the Canadian Prairies since 2017, and little relief is in sight as drier-than-normal conditions persist throughout the summer.

This includes areas around Edmonton, Alberta, and Regina, Saskatchewan, according to the Canadian Drought Monitor.

“Based on our current outlook, I fear that drought conditions may become extreme this summer from central and northern British Columbia through northern Alberta,“ Anderson said.

The anticipated dry summer follows an unusually dry spring across much of the Prairies.

Saskatoon, Saskatchewan, recorded its driest April on record with just a meager 2 percent of its normal monthly rainfall.

With the drought forecast to worsen this summer, farmers across the Prairies may face hardships.

The cost of hay has skyrocketed in recent months due to recent dry spells, according to Canadian Cattlemen.

With another dry season in the forecast, further stress may be put on crops.

Typical summer warmth will prevail across much of Quebec and Atlantic Canada, setting the region apart from the cooler, wetter weather in the forecast for much of Ontario.

“A more persistent west to west-northwesterly wind flow pattern should limit the amount of Atlantic moisture into the region, leading to more sunshine than usual,” Anderson said.

This will be different from last summer when much of the region experienced a wetter-than-normal season.

Meanwhile, showers and thunderstorms will frequent much of Ontario, limiting the number of hot spells and bringing an elevated risk of severe weather. This includes Toronto, Hamilton and London.

There will be plenty of biting flies and mosquitoes in Ontario this summer, including cottage country, due to this wet weather pattern, according to Anderson.

Flooding will also be a growing concern, particularly along the shores of the Great Lakes.

“Lake water levels throughout much of the Great Lakes are expected to remain well above normal into this summer, which also increases the risk for coastal erosion and property damage during storms,” Anderson said.

This wet pattern will also lead to a reduced risk of wildfires across Ontario throughout the summer.