The NTUC May Day Awards 2019 celebrates the dedication, commitment and valuable contributions of deserving individuals and organisations who have supported the Labour Movement (LM) and its initiatives. 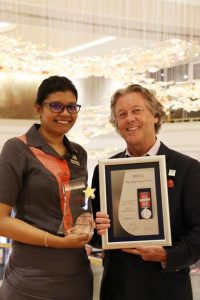 Mr Patrick Fiat was awarded the Medal of Commendation, which honours his contributions towards good labour-management relations, workers’ welfare and Labour Movement initiatives. The award was nominated by Singapore’s Food, Drinks and Allied Workers Union (FDWA). Under Fiat’s progressive leadership, Royal Plaza on Scotts introduced technology to the workplace to enhance job safety and productivity – an example being a uniform conveyor belt system in the housekeeping department. A strong advocate of continuous learning, Patrick also encourages CEOs to upskill with on-the-job training support and cross-training opportunities with corresponding remuneration across all levels and ages.

“I am incredibly honoured to be recognised by the NTUC Central Committee. At Royal Plaza on Scotts, our Chief Experience Officers (CEOs)* are our greatest assets. I believe in empowering them with the necessary skills so that we can stay relevant and adapt to the ever-changing hotel industry. It’s a constant work in progress as we continue to improve workplace practices and welfare programmes to meet the needs of our CEOs and guests,” said Patrick Fiat, General Manager & Chief Experience Officer (CEO) of Royal Plaza on Scotts.

Food and Beverage Captain, Ms Shahirah Shajahan, received the Model Worker award, a new award for outstanding individuals who exemplify Worker 4.0, displaying traits of being ready, relevant and resilient in their jobs. Shahirah is the only award recipient from the hotel industry. With a strong desire for learning, Shahirah has cross-trained in customer relations roles and attended a workshop to pick up conversational Mandarin skills. These opportunities have moulded her into the multi-skilled and versatile individual that she is today. Put her anywhere in the restaurant and she will be able to adapt quickly and carry out the duties confidently.

The achievements at the NTUC May Day Awards 2019 are an endorsement of Royal Plaza on Scotts’ commitment and passion towards its CEOs. People practices are at the heart of the brand and will continue to be.

Last month, Royal Plaza on Scotts Singapore emerged as the top hotel on this year’s Best Workplaces in Asia by Great Place to Work®. RP clinched the second spot in the Small & Medium Workplaces category, climbing up a rank from last year’s third position and is the only hotel awarded in the category.

*Chief Experience Officers (CEOs) refer to talents of Royal Plaza on Scotts, as every talent plays a key role. Each touch point is significant to every guest’s experience.