QF Flights From Australia Direct To FCO Take OffOakwood Premier Melbourne Confirming Its Luxury StatusLongreach Now One Of Australia’s Largest Cruising PortsBeyond Times Square Presents Luxury History Tours in BostonExperts Warn Travellers to Be Vigilant of ScamsSydney is One of the Best Cities for Baby-Boomers to Live in and VisitNEW 15-Day Tour of the Galapagos, Amazon & AndesTravel & tourism deal activity registers marginal growth of 1.4% in May 2022,Qantas To Expand PER Gateway With Flights To JNB And JKTViking Marks Float Out Of Newest Ocean Ship
Norwegian reveals soaring demand for new Dublin-Hamilton flights with 90% seats filled in first month - Global Travel Media

Norwegian today reveals that it has recorded soaring demand for its brand-new flights between Dublin and Toronto’s Hamilton Airport. 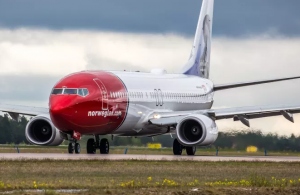 Since launch, the airline has flown more than 5,000 passengers with an average load factor of 90 per cent in April 2019, the first month of operation.

These numbers come despite the temporary worldwide grounding of the 737 MAX aircraft by several aviation authorities, that was originally planned to operate on the route and the adjusted frequency of the service as a result.

Matthew Wood, SVP Long-Haul Commercial said:“We’re seeing strong demand for our newest destination from Dublin as Hamilton offers a range of experiences that are still relatively new and undiscovered for Irish tourists.”

“I’m also particularly proud of delivering on our promise to customers by ensuring they could travel to and from Hamilton on a different aircraft type in response to the current 737 MAX challenges.”

The Hamilton route currently operates on Mondays, Wednesdays, Fridays and Sundays and from July, will operate three times weekly on the same days excluding Sunday using a Boeing 737-800 aircraft that includes free Wi-Fi.

The airline last year celebrated flying more than 250,000 passengers on its transatlantic services to and from Dublin Airport to the USA.

Norwegian in the UK and Ireland:

Emirates serves over 20,000 plant-based meals on board during ‘Veganuary’