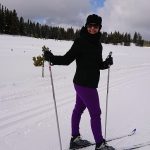 When the Vancouver leg of the HSBC World Rugby Sevens Series took place in March, twelve travel advisors from the UK, New Zealand and Australia were on hand to experience the destination and the tournament for themselves. Among the group of Rugby Sevens specialist advisors was TravelManagers’ Kristie Peters.

The week-long famil was hosted by Adam Hanmer from Tourism Canada’s UK office. Peters, who is TravelManagers’ representative for Glenroy, VIC, was one of three participants from Australia, who flew across the Tasman to join three more from New Zealand for a direct flight to Vancouver, where they met up with the rest of the group.

“I would now always travel Air New Zealand to Canada if given the choice,” Peters says. “Even though there is an additional flight because you travel via Auckland, their service and their product is second to none. Plus, the added bonus of being able to pay for a sky couch is brilliant, particularly for young families.”

Once in Vancouver, the group divided their time between taking in the fun, colour and excitement of the Sevens matches and taking in many of the other attractions this vibrant city has to offer. 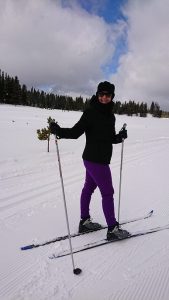 “The city is just incredible, and everywhere we went the locals were so friendly,” says Peters, who identifies Stanley Park as one of her favourite spots in the city. “Vancouver is such a walkable city, or you have the option of hiring a bike, and I loved exploring the park’s nine-kilometre seawall path, breathing the clean, fresh air and soaking up the views.”

Peters says she was also impressed by the eco-friendly aspirations and active lifestyle offered by the destination, with an abundance of organic food and fresh food markets in the heart of the city – something the group was able to appreciate first-hand during a Foodie Tour of Granville Island Market. 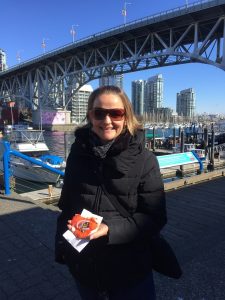 “The foodies tour of the markets is an absolute must – I can definitely see why it’s one of the most popular activities for visitors to Vancouver. As well as amazing food, I loved the street performers and live music – it’s a great spot for people-watching in general.”

With the North Shore mountains just a short drive beyond Vancouver, the famil group were able to experience a morning at Grouse Mountain, where they tried their skills in the snow with a snowshoe tour, before returning to Vancouver via the famed Capilano Suspension Bridge, concluding a busy day with a guided tour of three of Vancouver’s craft breweries.

“For the more brave-at-heart, the Capilano suspension bridge is an absolute must,” says Peters. “It’s suspended 70 metres above Capilano River and measures 137 metres long, and even though I was scared out of my mind, I’m so glad I made it across – the views were breathtaking.” 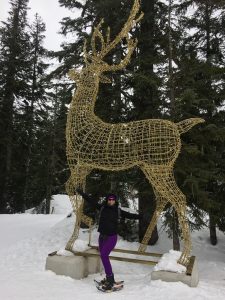 Just 20 minutes from downtown Vancouver, Grouse Mountain was a magical location for an introduction to snow-shoeing for TravelManagers’ Kristie Peters

As Peters discovered, even those visitors who have limited time to spend in Canada can experience many of its highlights in an incredible, state-of-the-art flight simulation ride at Vancouver’s FlyOver Canada.

“It was amazing,” enthuses Peters. “You’re suspended, feet dangling, in front of a huge, curved screen, for an eight-minute flight across Canada. The special effects, which include wind, mist and smells, make you feel like you’re actually seeing it for real.”

After four nights in Vancouver, the group boarded a flight to the city of Kelowna, where they spent two full days sampling the various attractions of British Columbia’s Okanagan Valley wine region. According to Peters, the snow-capped mountains form a stunning backdrop to the many local vineyards and craft breweries.

“For me, the standout was Mission Hill Winery: the beautiful grounds, the architectural building, the sommelier and of course the wine – the grandeur of this place was insane.”

The famil also provided the group with the opportunity to try snow-shoeing or cross-country skiing for a morning, after which their efforts were rewarded with a well-earned lunch at Apex Ski Resort’s Gunbarrel Saloon, which has been rated as Canada’s best apres-ski bar. Their accommodation for the night was at Spirit Ridge Vineyard Resort and Spa, in the heart of one of Canada’s most unique regions.

“The area surrounding Osoyoos Lake is the hottest and driest region in Canada – in fact it’s Canada’s only desert, and it’s considered sacred to the Osoyoos Indian Band,” Peters explains.

Their time in the Okanagan Valley also allowed plenty of chances to sample the local produce, with visits to wineries, craft beer breweries, a spirit distillery and a range of fabulous restaurants.

“My inner ‘foodie’ was very satisfied with our time in the Okanagan,” says Peters, “especially the foodie walking tour of downtown Kelowna – it was a great way to sample tantalizing food and signature drinks from a range of restaurants and eateries, while our guide was a wealth of interesting and fun facts about the region.”

From cross country skiing to wine tasting, from the Vancouver Aquarium to the neighbourhoods of Gastown, Yaletown and Chinatown, Peters says the famil has made it easier to sell the destination to her clients, and has given her insight into the Okanagan region, which she believes would make a great add-on to a Vancouver visit.

“Getting to experience the atmosphere of the Sevens Tournament in Vancouver ourselves was also a real highlight,” she adds, “but I’ll definitely be making a return visit because there’s so much on offer, I feel I’ve only scratched the surface.”

For more information or to speak to someone confidentially about TravelManagers please contact Suzanne Laister on 1800 019 599.

Best Ever Trading Month for TravelManagers