Barayamal is excited to announce the recent launch of theBarayamal Network, which is where Indigenous entrepreneurs can collaborate, network & receive mentoring.

Interested in Indigenous entrepreneurship, economic and community development? Want to keep up to date with the latest news and events?

The group looks to create a place where everyone from the Indigenous community and non-Indigenous supporters can collaborate to build a stronger Indigenous economy that will benefit all in Australia. The group will also allow people to share the latest events, news and offers to increase the collaboration between members.

“The group officially launched in April and has quickly grown to 800 members, which includes successful Indigenous entrepreneurs, technologist and community members who want to help each other and grow the Indigenous economy to create more opportunities in our communities that will help close the disparity gap through economic development. It’s an exciting opportunity for the Indigenous community to collaborate and work together to create a better Australia for everyone” said Dean Foley, Founder & CEO at Barayamal.

In 2016 there were over 11,538 Indigenous business owner-managers in Australia, rising from 8,891 in 2011 (29.8% increase). The future of the Indigenous economy is rapidly growing despite lagging behind other Indigenous economies. For example, the New Zealand Ministry of Business, Innovation and Employment figures estimate Māori assets are worth $42.6b — a 15.4 per cent increase from 2010.

The Barayamal Team is seeking support from Australian political parties, philanthropist and entrepreneurs to help drive real change that will support Indigenous Australians to achieve their self-determination aspirations. In our opinion, Indigenous entrepreneurship and economic development is the high growth solution that will help close the gap. 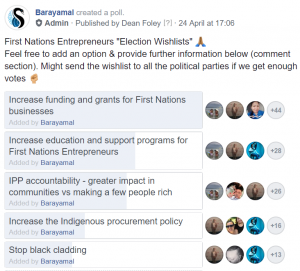 “I think the Federal Election will provide an exciting opportunity for the new Minister for Indigenous Affairs to make a real difference, instead of developing tokenism policies and spending a ton of taxpayer money that has done little to drive real change and actually help Close the Gap between Indigenous and non-Indigenous Australians.” Dean also added.

What Are Some FAQ’s About Industrial Power Factor Correction?

Benefits of a Storage Unit