Ghost of TCF rides again with Bestjet liquidators on the trail

Estimating the deficiency of defunct online travel operation Bestjet at AUD 22.6 million, liquidators probing the workings of Bestjet have obtained orders for public examinations to be conducted by the Federal Court of Australia.

Pilot Partners, the Bestjet liquidators, will hold a meeting of creditors later this month at their Brisbane premises (Level 10, 1 Eagle Street, Brisbane, QLD, 4000) at 10am on 22 May 2019.

In a statutory report to creditors issued on 29 April 2019, Pilot Partners advised that it has also commenced legal proceedings in Singapore “in relation to rebates allegedly owing to the Company [Bestjet] from Bestjet Travel Pte Ltd (‘Bestjet Singapore’).”

Meanwhile, far from fading away, the Bestjet fiasco is still very much in the public eye – and the former Travel Compensation Fund (TCF) has hit the news once more.

In her words: “Following fierce industry lobbying, the TCF and state-based consumer protections were scrapped across the country, forcing consumers into drawn-out fights with their banks and insurers to reclaim their cash.”

Lentini looks at ordinary Australians left out of pocket by the Bestjet collapse. She spoke to noted Sydney-based specialist travel lawyer Anthony Cordato, who told her it was a mistake for the TCF to have been disbanded because “it was not replaced with a proper scheme to protect customers”.

“It’s not fair because the consumer doesn’t know the risk they’re taking when they’re paying the money to the travel agent,” the author of the Australian Travel and Consumer Law handbook said.

Cordato told Lentini he believed the government should make it compulsory for travel agents to warn consumers about the risks of insolvency. You can read Lentini’s report on the 9Finance site here.

The liquidators say they have obtained Bestjet’s books and records, including the accounting packages.

However, the source documentation for the accounting packages has not been recovered.

Below: From the liquidators’ latest report on Bestjet 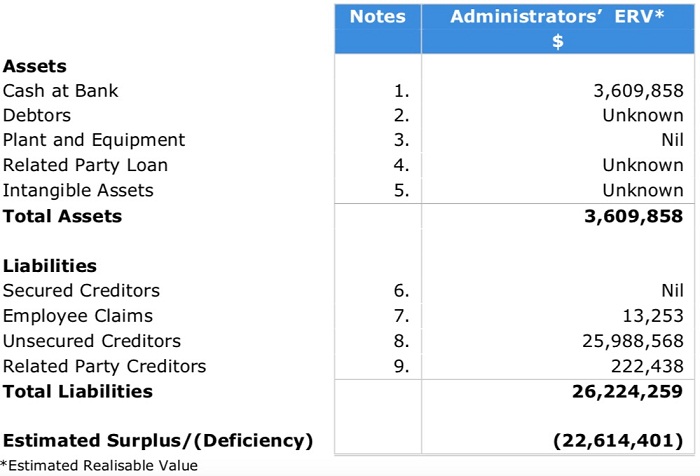 “We have reason to believe the operations platform is controlled by related parties in Singapore,” the liquidators’ report says.

The liquidators say that in order to obtain the necessary books and records from other parties they have obtained orders to conduct Public Examinations “of certain person who may be able to assist with our investigations”.

The liquidators also note: “A director has a duty to prevent insolvent trading by the Company. If it is proven that a director (or a de facto or shadow director) has failed to comply with this duty, it may be possible for the Liquidators to recover from the director an amount equal to the loss or damage suffered by the Company.

“Our investigations have revealed that the director, former director and de facto/shadow director may have breached their obligations to act in good faith and in the best interests of the Company pursuant to section 180 and 181 of the Act [Corporations Act 2001].

“The Liquidators have completed and lodged with the ASIC a 533 report which outlines the offences that may have been committed.

Below: The Bestjet Travel Group. Also showing what the liquidators don’t control.

“As previously advised, the Liquidators have also reported Mr and Ms James’ to ASIC for failing to provide information in relation to the Company’s affairs. ASIC has requested that we complete a supplementary report pursuant to section 533(2) of the Act. A further report to ASIC may be required after the Public Examinations”.

Pilot Partners say they have requested from Bestjet director Rachel James all company books and records and information in relation to the company’s affairs including, a request for the completion of a Report on Company Activities and Property (“ROCAP”).

“Ms James has failed to comply and we have reported this non-compliance to ASIC. ASIC are continuing to request Ms James complete a ROCAP.

“We have removed access to all former staff and Mr James from the Xero accounting package.

“Our review of the Company’s Xero account also revealed that Mr James (or a user with his details) accessed Xero four times post our appointment, as late as 3 January 2019, despite Mr James advising us that he did not have access to this account.”

Another intriguing observation in the Pilot Partners report is that Bestjet’s June 2018 financial statements noted the following: “Bestjet purchased an ownership interest in the Aulani, Disney Vacation Club Villas, Ko Olina, Hawaii I Vacation Ownership Plan. As part of the interest, Bestjet has access to the Disney hotel network.”

The liquidators propose to have their remuneration and disbursements approved at the coming meeting of creditors. The total remuneration they currently seek is AUD 577,702.

New Deals From Your Travel Club

Abu Dhabi welcomes you – vaccinated or not

What exactly does ‘pent up travel demand’ look like for Australian travellers?