Home favourite Yuka Yasuda, leading a tournament in the final round for the first time, provided a masterclass in front-running as she left the field in her wake and won the second Women’s Amateur Asia-Pacific championship (WAAP) by eight shots.

The 18-year-old from Kobe started the final round at The Royal Golf Club leading by two shots. After making a birdie on the opening hole, she never lost the honour. She signed for a bogey-free seven-under-par 65 to tally 11-under 277 for the championship. 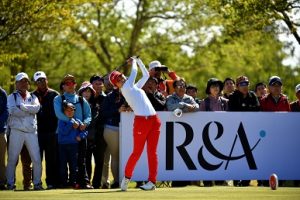 Thai Atthaya Thitikul (71), champion at the inaugural WAAP in Singapore, finished runner-up at three-under while the Korean duo of Lee Ye-won (70) and Hong Yae-eun (73) were third and fourth respectively.

“Honestly, I wasn’t expecting to win the championship. But so many people came out today and they cheered and motivated me and I am happy that I could play some good golf,” said Yasuda.

“This is such a huge win for me. I am trying to become a professional golfer and I am sure this is going to open many doors for me in the future.

“I get the opportunity to play two Major championships with this win [the AIG Women’s British Open and the Evian Championship]. That experience will definitely help me become a better player.”

Two shots behind the leaders after a bogey on the 14th hole on Saturday, Yasuda finished with one eagle and three birdies to grab sole possession of the lead by two at the end of the third round. She increased that advantage to six shots with four birdies in her first five holes today.

Yasuda hit it close with her second shot on the first hole. She seemed to be in trouble on the second when her tee shot went into the trees but a superb second left her 20 feett short of the pin and she made the putt. On the third, she poured in a 15-foot putt. At that point, she was eight-under for her last seven holes.

Yasuda made further birdies on the par-four fifth and par-five eighth holes. Equally important were par saves from the bunkers on the seventh and ninth holes. That helped her make the turn in 31 and nine-under for the championship, seven ahead of Atthaya.

On her back nine, Yasuda added birdies on the par-five 13th and 16th holes to complete a dominant win.

“I played a perfect round of golf today, except for a couple of second shots after which I had to make good recoveries. I thought those pars [on seven and nine] were very important to keep the momentum going my way,” said Yasuda, who has also secured a spot at the 2020 Augusta National Women’s Amateur.

“The finish yesterday was important because it gave me the lead. Being chased is as hard as chasing the leader so I needed to begin my final round well. I think the start today was more critical because it helped me settle down.”

World number nine Atthaya, the highest-ranked player in the field, could not muster enough birdies to put any pressure on Yasuda.

“I played okay. I missed some birdie putts but Yasuda played such a solid round and showed me a great performance,” said Atthaya. “I came in as the defending champion and I enjoyed being here. We played in some very tough conditions and that is going to be a great learning experience for me.”

Japan’s Yuna Nishimura (73), who lost in a play-off to Thitikul last year, was in fifth place at one-over, while China’s Lei Ye (72) was sixth, one shot behind her.