JP Morgan has topped the latest mergers and acquisitions (M&A) league table of the top 10 financial advisers in the construction sector based on deal value in the first quarter (Q1) 2019, according to GlobalData, a leading data analytics company.

JP Morgan beat its fellow counterparts Morgan Stanley, Goldman Sachs and HSBC to lead the table with seven deals worth US$13.3bn, including the big ticket deal of CapitaLand’s acquisition of Ascendas and Singbridge from Temasek for US$8.1bn.

Ravi Tokala, Financial Deals Analyst at GlobalData, says: “M&A activities in the construction sector started on a slow note in 2019, with Q1 witnessing a major drop in deal activity as compared with the same quarter last year. Almost all the top 10 advisers by value advised less than five deals, except JP Morgan and Morgan Stanley, which managed to work on seven and five deals, respectively. CapitaLand’s US$8.1bn acquisition of Ascendas and Singbridge was instrumental in deciding the top spot for both financial and legal advisers in league tables. 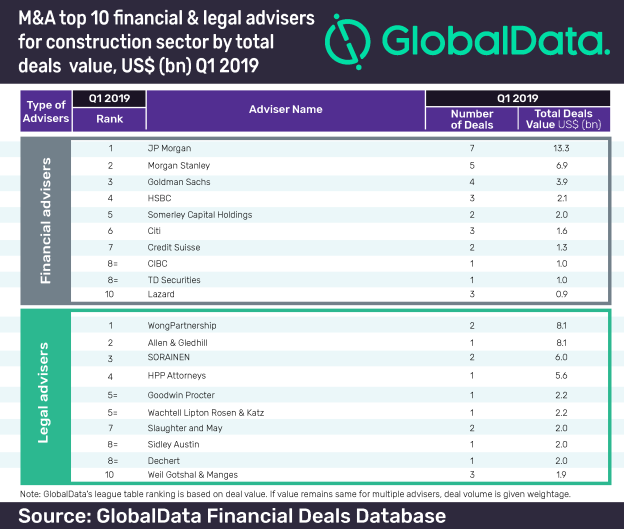 Singapore-based WongPartnership topped the list of top 10 legal advisers by value with two deals worth US$8.1bn. Although Allen & Gledhill too advised on US$8.1bn deal, WongPartnership gained an edge in the ranking due to deal volume. The four top firms in the sector table were conspicuous by their absence in the global league table of top 20 M&A legal advisers. Kirkland & Ellis occupied first position with 128 deals worth US$215.9bn in the global list. Goodwin Procter, Wachtell Lipton Rosen & Katz, Weil Gotshal & Manges, which figured in the sector table, were also present in the global list.