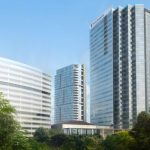 A lush landscaped haven of relaxed luxury in a booming city, the all-new Four Seasons Hotel Bengaluru at Embassy ONE is now open.

“We are delighted to welcome our first guests, and particularly excited to showcase the modern city of Bengaluru to our visitors,” says General Manager Fredrik Blomqvist, who oversees a hand-picked team of nearly 250 deeply dedicated employees. “It’s such an exciting time in southern India, and we are proud to be at the forefront of the city’s business and social lives.”

Developed by India’s leading developer Embassy Group, Four Seasons Hotel Bengaluru at Embassy ONE brims with modern sophistication featuring interiors by Yabu Pushelberg, beautifully complemented by a carefully curated collection of paintings, prints and sculptures by more than 25 contemporary Indian artists throughout the hotel. Rooms and suites offer views of the greenery, some featuring the Palace Grounds. At the Hotel’s dining venues, Four Seasons chefs and mixologists take centrestage in interactive style bringing energy and vitality to the dining experience. Embassy ONE is also home to 105 Four Seasons Private Residences, the first of its kind in India.

“It is very fulfilling to see Four Seasons open its doors to the city of Bangalore. What started off as a vision of excellence in service and hospitality is now a reality. The many synergies in our culture, service offerings, and vision between Four Seasons and the Embassy Group have brought us together to create this iconic asset. We are positive that the extraordinary experiences that Four Seasons offers will continue to build loyalty among customers, making it their first choice of luxury hospitality in Bangalore.” says Jitu Virwani, Chairman & Managing Director, Embassy Group.

“It’s truly a milestone as we open our second hotel in India,” notes Rainer Stampfer, Four Seasons President Hotel Operations – Asia Pacific. “Together with our property in Mumbai, Four Seasons reflects the vibrancy and poise of modern India through design, experiences and personalised service to meet the needs of both travellers and local residents.

To welcome its first guests, Four Seasons Hotel Bengaluru offers the ‘Gateway to Bengaluru’ package extending complimentary roundtrip airport transfers and a dinner at CUR8 for stays from May 1 to June 30, 2019 with a minimum stay of two nights. To be among the first to experience Four Seasons Hotel Bengaluru at Embassy ONE, call +91 (080) 4522-2222 for room reservations or book online

A Garden Oasis Set amid 5.6acres of landscaped gardens and water features including a(100 feet) outdoor pool, the Embassy ONE oasis mirrors the city’s unique combination of modern urban architecture dotted with calming parks and gardens.

Inside Four Seasons Hotel Bengaluru, 191 rooms and 39 suites are light filled, with crisp lines and thoughtful details designed for today’s luxury traveller, whether in town for business, enjoying a romantic weekend getaway or bringing the whole family for a vacation. Highly recommended are the Garden Suites with a living and dining area opening onto a private terrace separated from the luxurious bedroom, generous bathroom and double closets. 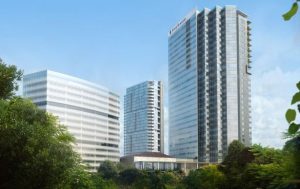 All accommodations feature the fully customisable Four Seasons Bed with a choice of plush, signature mattress topper to ensure a good night’s rest.

Urban views of the lush tree tops across the city, emphasize the abounding greenery that Bengaluru is famed for.

Led by Executive Chef Stéphane Calvet, the culinary team brings an international outlook to the table at Four Seasons Hotel Bengaluru. The dining experiences are diverse –

At CUR8, guests are welcomed into a design led indoor/outdoor restaurant as the drama unfolds with chefs on show at the numerous open kitchens. At the lobby level, The Lobby Lounge and Terrace, promises the city’s best afternoon tea, as well as the Four Seasons special blend of teas, coffees and light fare around the clock. The moist Travel Cakes are the highlight here along with scones made from vanilla pods sourced from Kerala. For the spirited connoisseur, lively conversation is paired with the world’s finest whiskies at The Collection every evening. There’s also the Pool Bar offering poolside tropical refreshments amid the Hotel’s green gardens.

Far & East literally tops the dining experience at Four Seasons from its modern space on the 21st floor, bringing together a melange of Chinese, Japanese and Thai cuisines, as well as classic dishes such as the expertly prepared Peking duck. Fancy a nightcap? Copitas offers late night cocktails, as well as sundowners and shared platters with a view on the 21st floor terrace for the after-work crowd.

Infuse Spa, a hideaway by the pool

Signature treatments created especially for Infuse Spa including the Coffee Scrub, which harness the rich powers of locally grown coffee from nearby Coorg; the sensual Candle Massage; the Flower at Four Seasons experience inspired by the Hotel’s green setting in the Garden City; and the heavenly On the Chocolate and Spice Trail, which is even more magical than it sounds.

With 16,574 square feet of event spaces accommodating as many as 1,000 guests, Four Seasons Hotel Bengaluru is ideally positioned for business functions ranging from executive board meetings through high impact product launches and multi-day conferences. 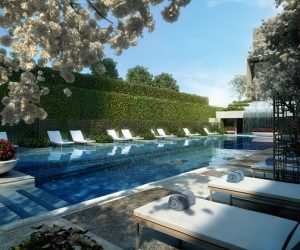 For weddings and other social events, the flexibility of the divisible Grand Ballroom, open terrace with built-in chef’s kitchen and variety of smaller spaces all on one floor with direct access from the Hotel’s main entrance, suggest a world of creative inspirations for the most memorable occasions. Not to be missed: Formal and Instagrammable photo opportunities in the Butterfly Garden and on the Ribbon Lawn or even the Grand Staircase.

The expert catering and events teams at Four Seasons work hand in hand with event and wedding planners to ensure every detail is flawlessly executed.

Get to Know Bengaluru

The capital of the southern state of Karnataka, Bengaluru – also known as Bangalore – is one of the country’s fastest growing cities thanks to a thriving tech industry as well as a significant presence in the aerospace and manufacturing sectors, including many research and development campuses associated with Indian and international companies.

Major events in the city include EXCON, an annual trade fair showcasing construction equipment and construction technology in December, and the biennial crowd-favourite Aero Show.

“But it’s not all work and no play here in the Garden City,” notes Assistant Chef Concierge Rachita Bhargava, who is a member of Les Clefs d’Or India. “Bengaluru is very much at a crossroad of the old and new with modern architectural designs existing alongside the Bangalore Palace, Tipu Sultan’s Summer Palace and Bangalore Fort. The city offers many opportunities for cultural exploration.”