Bites and Stings: The Price of SummerFees halved by Australia’s only travel advisory program for small ship cruisingIT&CM Asia and CTW Asia-Pacific Returns To BangkokHats off! Aussie headwear brand, ooGee, releases crush-resistant range of stylish, travel-friendly hatsHow increased web conversion of their paid traffic by 31% in 2 monthsP&O Cruises Australia’s Historic Encounter in Trieste, ItalyEscape this year at Sir Richard Branson’s luxury mountain chaletInternational tourists back, but rebuild will take timeTravel tech: What is it? How is it changing the world?Travel Industry Bouncing Back:
Sekito Comes of Age in Penang - Global Travel Media

Sekito Comes of Age in Penang

Naoki Sekito captured his first Asian Development Tour (ADT) victory with a four-under-par 68 in the final round of the RM225,000 (about US$54,000) PGM ADT Penang Championship. 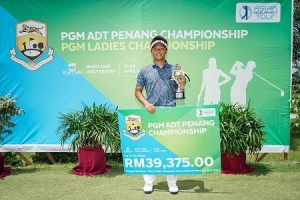 The 21-year-old Japanese compiled a four-day total of 17-under 271 to win by one shot from Malaysian Danny Chia (66) and American Sam Gillis (68) who were tied for second.

Sekito entered the final round with a one-shot advantage, but relinquished that lead immediately. “I bogeyed my first hole after I pushed my tee shot to the right and had to chip out from behind the trees. But after that bogey, I was less nervous because I wasn’t the sole leader so I knew I could keep chasing,” said Sekito, who did not drop any further strokes and notched birdies on holes two, seven, 10, 12 and 15.

Sekito took home a cheque for US$9,529.28 and received six Official World Golf Ranking points. “I told myself in January that my goal was to win on the ADT and get into the top-seven on the Order of Merit,” added Sekito, who rose to fifth spot in the standings.

With a new putter in his bag, two-time Asian Tour winner Chia rediscovered his form. He traded two bogeys against eight birdies to enjoy his first top-10 finish since his joint runner-up result on the ADT in July of 2017.

“I’m very happy with how I played this week. It has been a while since I’ve had a top-10 finish. It was an up-and-down round where I had a good run of birdies from holes three to seven but three-putted on hole eight for bogey.

“Overall I am putting well and this week was a confidence boost. I can see the changes since I switched my putter and I am playing more consistent golf.”