New Royal Caribbean Ship, Utopia Of The Seas, Reaches First Major MilestoneFollow in the ‘Footsteps’ of Lady Gaga With Full-Day ‘House of Gucci’ Excursion from Italy’s Quiiky ToursAs travel heats up, Berlin, New York City, and Dublin named as ‘sold out cities’ for summerHow to pack your carry-on like a proTourism Ireland Announces Green Button CampaignVanuatu says Welkam Back! to Australian visitors as first flight lands in Port VilaA Lush Resort, Mere Minutes from Landing in PhuketMy Beach, My SanctuaryBurnt toast delays flights as airport terminal evacuatedPeter Mambo
Flyarystan Sets Out Its Appeal To A New Generation Of Traveller As It Takes Off Today From Almaty, Kazakhstan - Global Travel Media

Flyarystan Sets Out Its Appeal To A New Generation Of Traveller As It Takes Off Today From Almaty, Kazakhstan 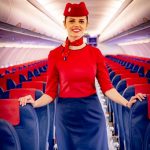 From announcement to revenue realisation within six months, a 160-strong workforce supporting the business has been established in Almaty, Air Astana’s HQ.  This includes 25 pilots and 45 flight attendants, with many seconded from Air Astana.  The rest are new recruits who, in addition to undertaking call centre reservations work, are being trained to assist in ambassador roles at check in as part of the FlyArystan ground services team across the 7 initial cities served.

Air Astana has supplied an initial two Airbus A320 aircraft from its fleet under its Air Operator’s Certificate, painted up in the striking FlyArystan red and white livery.  A further two A320s will follow in the last quarter of the year, by which time FlyArystan should be operating at least 12 routes and will be looking at obtaining an AOC in its own right.

The aircraft have been newly retrofitted with 180 brand new blue leather Recaro slimline seats, featuring red head-rests, the same colours as the cabin crew uniforms, designed by a local fashion house, working closely with Air Astana’s inflight team.  Seat pitch is 29 inches, but with the feel of 31 inches, owing to the curve of the seat and high positioning of the seatback pockets. 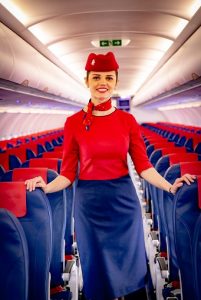 The onboard offering is the FlyArystan café, with prices complementing its low air fares.  Refreshments and snacks include hot and cold drinks, including local beer; baguettes; pot noodles and chocolate bars.

“With this exciting new airline we are courting a new generation of travellers.  People who typically get around our large country using the train or bus, or those who don’t travel at all.  We are pitching FlyArystan at the visiting friends and relatives market, primarily.  In turn this will stimulate the leisure market as a second strand, together with an element of business travel.  A number of destinations handed over to us by Air Astana will suit a different, more price-conscious demographic.  Accordingly, we aim to introduce some purchase options giving flexibility for business flyers, including offering refunds or the ability to change tickets, albeit at higher tariffs,” said Tim Jordan, Head of FlyArystan.

Passengers travelling with 5kg of hand or cabin baggage will not be charged. Travelling with 10kg of luggage however, will incur a cost – dependent on whether the route is short, medium or long.

Welcoming Kazakhstan’s decision to implement legislative changes enabling airlines to start charging passengers for baggage, Tim Jordan stressed it is important that baggage costs are not out of kilter with FlyArystan’s low fares, as it sets out to capture new flyers.

FlyArystan’s corporate identity is a lion. “What we are doing with this new airline is delivering something new and different for the people of Kazakhstan. With our super low fares we are being brave and courageous – just like the lion – a popular and revered animal in Kazakhstan and central Asia,” Tim Jordan stated. 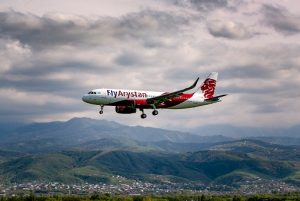 Almaty International Airport is also embracing the new model.  “They see we have a lot of these low fare seats on offer and are beginning to understand the efficiency we are pledging to bring – for our passengers and the airport.”