Sri Lanka tourism chief: ‘Stand with us at this difficult time’ 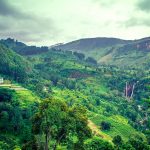 Sri Lanka’s tourism chief has implored the world’s travel industry to keep supporting the island nation in the wake of the Easter Day terrorist outrage – though he admitted Sri Lanka had already scaled back its tourism target for 2019.

“Stand with us at this difficult time,” Kishu Gomes, chairman of the Sri Lanka Tourism Promotion Bureau, told media at the Arabian Travel Market (ATM) in Dubai.

“This is not Sri Lankan terrorism; this is global terrorism.”

Sri Lanka’s tourism industry would not give in to terrorism, Gomes said. It is increasing its efforts, with 60 travel agents and hoteliers on the Sri Lanka pavilion at ATM. Gomes invited everyone to visit the pavilion and extend solidarity. Sri Lanka would have a big presence at other trade shows; it was planning a global marketing campaign and the country was determined to “get back on track and again be number-one tourist destination.

The Sri Lanka Convention Bureau will also participate in IMEX in Frankfurt, 21-23 May.  IMEX is a worldwide exhibition spotlighting Incentive Travel, Meetings and Events. 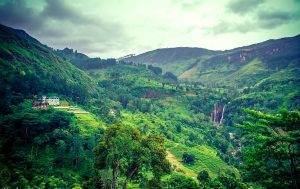 One in every 10 Sri Lankan families depended on tourism for their livelihood, both directly and indirectly, Gomes said.

“Sri Lanka Tourism is focused on ensuring that the right groundwork is laid to drive an effective and efficient recovery for this critical industry.

“We cannot allow ourselves to become paralysed by fear. Nearly half a million families across the island depend on us for their daily living; the impact on our economy must be mitigated.

“We are working to regain the confidence of global travellers and operators by demonstrating that Sri Lanka’s response to the incident is effective – while reassuring future tourists that all appropriate steps are being taken by the Sri Lanka Government to prevent any future incidents and ensure the continued safety and security tourists within the country.”

Gomes said that although tourist arrivals in Sri Lanka would inevitably fall, they would bounce back again. 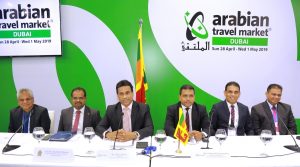 Sri Lanka tourism officials front the media at the Arabian Travel Market in Dubai. Kishu Gomes is third from left

Trying to estimate the inevitable downturn, Gomes noted that it coincided with a normal seasonal decline, but arrivals were likely to fall by 50% in Colombo over the next couple of months and 30% in outlying areas. Sri Lanka had set a target of 2.5 million tourist arrivals in 2019 and this had been revised to about 2 million (a 20% reduction).

Gomes said 42 foreigners lost their lives in the attack, which killed over 250 people.

He said within 30 minutes of the attacks, a senior team visited the three hotels that were bombed, to ascertain the situation. Two of the hotels resumed operations within a few days and the third, the Shangri La, is due to reopen on 10 June 2019. Security had been stepped up at all hotels to improve confidence among travellers, he said.

The army had swiftly gained the upper hand following the “brutal attacks” and “since then, we have not had a single attack by a terrorist”.

Gomes acknowledged reports of bombs going off and “minor shootings here and there” but said that was the action of the army dealing with the terrorists.

Gomes reminded the audience that Sri Lanka’s recent history had included a three-decades-long civil war which ended when the army crushed – “the most brutal terrorist group in the world”.

“Wearing garments that cover the face completely will be banned… to ensure public safety,” the presidential decree proclaimed.

Written by Peter Needham at ATM in Dubai

CHOICE report opens eyes to the refund debacle in Australia and it is shocking. 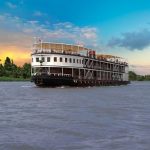