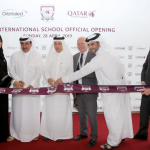 The school, which was initially located near the airline’s headquarters, has operated in partnership with Orbital Education since 2016 and offers a modified version of the National Curriculum of England for the children of Qatar Airways’ employees, from Foundation Stage 1 to Year 10.

Qatar’s Minister of Transport and Communications, His Excellency Mr. Jassim Saif Ahmed Al-Sulaiti, said: “I am proud to see our national carrier of the State of Qatar provide such a world-class facility, further reinforcing our country’s commitment to excellence. This school will help educate a new generation of leaders, many of whom I know will make valuable contributions to the future of Qatar.”

Qatar Airways Group Chief Executive, His Excellency Mr. Akbar Al Baker, said: “We are delighted to have the opportunity to showcase the many wonderful facilities and resources on offer to students at the new, state-of-the-art Oryx International School Mesaimeer campus.

“Our vision was to create a premium education facility dedicated to providing an exceptional curriculum and world-class facilities for the families of the airline’s employees, in a nurturing community-based environment. This school is a statement to the world that Qatar Airways values its staff, and values their children. We are pleased to see how the school has continued to grow from strength to strength and look forward to learning of the many fantastic achievements of its students.”

Orbital Education Chairman, Mr. Kevin McNeany, said: “It is inspiring to partner with Qatar Airways, who are renowned for their global reputation for excellence. We have seized this opportunity with enthusiasm and have appointed a team of qualified and experienced educators, all of whom are proficient in teaching the English National Curriculum.

“The facilities which Qatar Airways has provided perfectly compliment the five-star educational experience that our children receive.  Families of Qatar Airways can be assured that Orbital Education will take the utmost care of their children and help them to thrive and succeed as global citizens of the 21st century.”

International School Executive Principal, Mr. Derek Laidlaw, said: “I am delighted to have been afforded this unique opportunity by Orbital Education and Qatar Airways, to lead the development of the new Oryx International School. Our children come from 90 different countries, reflecting the global reputation of Qatar Airways, and have settled extremely well into their new surroundings.”

Oryx International School Parent Teacher Student Association Chair, Ms. Harjeet Kaur, said: “What children and parents love most about Oryx International School is its unique sense of ‘family’, both through its connection to Qatar Airways and the wider school community. Qatar Airways has clearly strived to provide a school that befits its status as one of the best airlines in the world, as well as its commitment to placing its staff and their families at the heart of the Qatar Airways community.”

Qatar Airways currently operates a modern fleet of more than 250 aircraft via its hub, Hamad International Airport (HIA), to more than 160 destinations worldwide.

Fund For Education Abroad Awards Over $1.6 Million In Scholarships During Inaugural Decade, As Reported In First-Ever Impact Report

What is an essay writing service?