The first round of the elite event in the women’s World Amateur Golf Ranking (WAGR) will tee-off at the Royal Golf Club on April 25.

Yasuda, 18, finished fifth in the inaugural WAAP at Singapore’s Sentosa Golf Club, failing by one shot to join a four-way play-off that was won by Atthaya and also featured Saso and Yasuda’s compatriot Yuna Nishimura (52).

Yasuda, winner of the Junior World Cup and Women’s Australian Master of the Amateurs, comes into the WAAP in good form, having finished tied for third place with Saso at this month’s inaugural Augusta National Women’s Amateur (ANWA).

“It is a matter of great pride that so many girls from Asia are playing well in tournaments across the globe,” said the Kobe resident. “I think it is the result of having set up an environment in which we can play golf happily. There are many good players of my generation and it will be an exciting championship.

“I will be playing at the Royal Golf Club for the first time. However, if I can play like I know I am capable of, I think I can do well.”

Disappointed to miss the cut by one shot at the ANWA, Atthaya, the highest-ranked player in the field at number nine, is keen for a strong showing in Japan.

The youngest winner in the history of the Ladies European Tour (she won the 2017 Thailand Open at the age of 14 years, four months and 19 days), Atthaya said: “I’m so excited to be able to play in the WAAP again. I just want to enjoy every moment of the championship and do my best. There is no pressure. 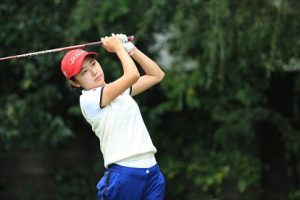 “The win last year meant so much to me. I got invitations to a lot of big tournaments on the LPGA and I learned a lot playing with the professionals.

“I think this is a great championship for all the amateurs in my country and for all the girls in the region. I hope the opportunities I got to improve myself after the win acts as an inspiration for everyone else in the field.”

Asian Games double gold medallist Saso (individual and team titles) said: “I’m really happy to be able to play again in the WAAP. It is one of those championships you just don’t want to miss.”

The field at the Royal Golf Club comprises 17 players ranked inside the top-100 of the WAGR. The champion will earn a place in two of the five women’s Majors – the AIG Women’s British Open and the Evian Championship. She will also receive an invite to the 2020 Augusta National Women’s Amateur.

Golf Industry Recognised as Group Volunteer of the Year