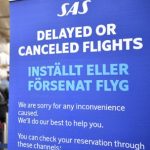 A wave of pilot strikes has hit SAS, the national airline of Sweden, Norway and Denmark, leading the airline to ground about 70% of its services and cancel hundreds of flights, including long-haul.

Talks between the pilots’ union and the airline have continued for a month without reaching agreement.

Over 200 flights were cancelled on Thursday, another 110 cancelled on Friday, and 587 on Sunday as the union refused to return to the negotiating table. Long-haul flights are affected as well as domestic and European services, according to The Local Sweden, a site which specialises in Swedish news in English.

Over 100,000 passengers have been affected so far.

“We want nothing more than that the parties return to negotiations as soon as possible so that no more passengers are hit,” SAS media spokesperson Freja Annamatz told Sweden’s TT newswire.

“We made a decisive move yesterday by pre-cancelling, so that there was more predictability today. I think we had a less chaotic situation at the airports than would otherwise have been the case.”

About 1400 pilots are striking over pay and conditions. The strike is estimated to be costing the airline between AUD 9 million and AUD 12 million a day. 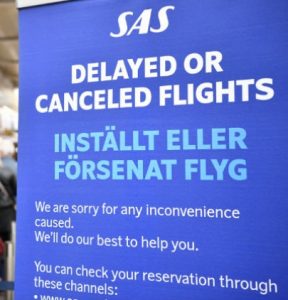 The company has set up a dedicated page on its website carrying the latest information on the strikes in English. You can view it here.

Below is a disgruntled tweet by American jazz singer and musician Curtis Stigers, peeved after being caught out by the strike chaos while on a tour of Scandinavia.

The pilots are on strike & @SAS won’t even answer the damn phone to help rebook my band’s flights.
I’m bringing some guitar picks and a capo to Denmark. Can you say Accidental Solo Acoustic Tour?https://t.co/VK2Yy7AMsm pic.twitter.com/3Gbk3Q7lqq