Liu Wenbo and Du Mohan, two of the China LPGA Tour’s rising stars, are testing their mettle against the men at this week’s Shenzhou Peninsula Open, a China Tour event in Hainan Island.

The Beijing teenagers, both of whom turned pro last year after helping the China women to a team bronze at the Asian Games in Indonesia, received the invitation from the China Golf Association.

The RMB700,000 tournament is taking place at The Dunes at Shenzhou Peninsula, a Tom Weiskopf design in Wanning.

Liu, winner of the Zhangjiagang Shuangshan Challenge on the China LPGA Tour as an amateur in 2017, came out strong immediately after turning pro. In October, the 18-year-old tied for runner-up at the Buick LPGA Shanghai against a top international field at Shanghai Qizhong Garden Golf Club, a tournament where she briefly held a share of the lead in the final round.

“I am healing from acute gastro-enteritis that forced me to withdraw from the CTBC Ladies Classic. I hope I can make the cut this week, but the yardage is much longer than at ladies tournaments,” said Liu, individual silver medal winner at the Asian Games.

“My goal for this year is to be top 100 in the Rolex World Golf Ranking. In October, I will go to US for the LPGA Q-School.” 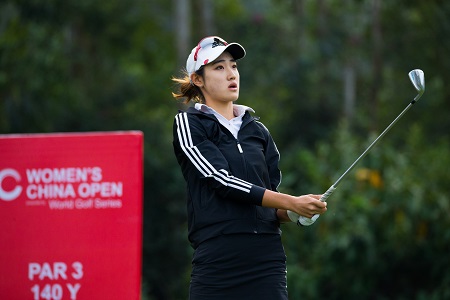 Du, a 17-year-old originally from Fujian Province, has also been impressive in her first full year in the paid ranks. After starting the season with an equal third in Zhuhai she was equal fourth the following week at the CTBC Ladies Classic in Guangzhou.

Since then, Du, who is currently fifth on the China LPGA Tour Order of Merit, has been practicing at Mission Hills in Haikou after taking a break following the Guangdong tournaments.

“I worked hard during my winter training in the US and I am getting much stronger physically. My distance is getting longer by about five to 10 yards,” Du said.

“My goal for this week is to learn more from the experienced players to see how the top tier male players are handling the game, especially when their ball lies in a difficult position. I hope I can make the cut.”

If either player succeeds in progressing to the weekend rounds they will follow in the footsteps of Yang Taoli. In May 2008, the Sichuan native played against the men at the Shanghai Championship on the old Omega China Tour and finished equal 19th. The following year she would win the inaugural China LPGA Tour Order of Merit.

After the Hainan tournament, Liu and Du will travel to Hong Kong where they will play in the US Women’s Open China sectional qualifier at Fanling, followed by the Hong Kong Ladies Open.