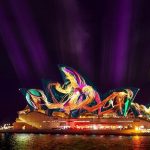 Jørn Utzon’s architectural masterpiece will be transformed into a digital light sculpture from Friday 24 May until Saturday 15 June for Vivid Sydney, the largest festival of light, music and ideas in the Southern Hemisphere. LA-based multi-disciplinary artist Andrew Thomas Huang’s specially commissioned site-specific artwork Austral Flora Ballet will animate the World-Heritage Sails with a lush homage to Australia’s native flora and the intersection of human movement with nature.

Andrew Thomas Huang, Curator of Austral Floral Ballet, says: “It’s an absolute thrill to create an artwork to be projected onto the Opera House Sails, one of the world’s most iconic landmarks. I am smitten at the prospect of creating this work with a team of wonderful collaborators, namely the talented animation team at Bemo in Los Angeles, visionary choreographer Toogie Barcelo, dancer Genna Moroni and the incredible Vivid LIVE musician Kelsey Lu who will be composing original music for the piece.

“Austral Flora Ballet features shapes, colors and textures of native Australian flowers brought to life by kinetic human movement. By drawing connections between dance and native plants, this work underscores the inextricable link between the human body and nature.”

Admired as an experimental filmmaker and animator, Huang’s work bridges the gap between video art and film. He has previously collaborated with leading musicians including Björk, Sigur Rós, Thom Yorke and most recently FKA Twigs for her new music video “Cellophane” as well as British director, Joe Wright (Atonement, Darkest Hour).

Huang will craft a hypnotic spectacle from five beloved floral gems, New South Wales Waratah, Kangaroo Paw, Hakea Archaeoides, Kingsmillii Eucalyptus and the Red Beard Orchid, all of which have a strong connection for the country, story and dance of First Nations people. He integrates the anatomy of these elegant Australian flowers with motion-captured dance performances in direct response to the architectural form of the Sails.

Ben Marshall, Curator of Vivid LIVE at the Sydney Opera House says: “Using the Sydney Opera House Sails as a canvas for art in Lighting of the Sails is always a significant moment and this year will be particularly special. We were drawn to Andrew Thomas Huang through his captivating polymorphic work for musicians like Bjork and are genuinely honoured he is bringing his prodigious, dextrous imagination to Vivid Sydney in 2019. Andrew’s iridescent transfiguration of Utzon’s iconic vision in Austral Flora Ballet will enthral the city and accompanied by Kelsey Lu’s original music, beautifully exemplifies Vivid LIVE’s musical celebration of ambitious outsider artists who’ve spectacularly succeeded on their own rigorous terms.” 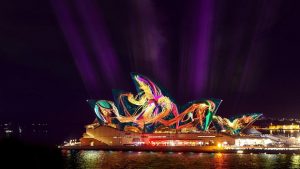 Minister for Jobs, Investment, Tourism and Western Sydney Stuart Ayres says: “Vivid Sydney positions the city as the hub of creative industries for Asia and the Pacific. The innovation and inspiration showcased by this piece reflects how the festival brings together world-class artists and visionaries to put Sydney in the global spotlight. In 2018 Vivid Sydney welcomed 2.25 million visitors, who generated almost $173 million in tourism related expenditure for NSW, while the reach of the festival through traditional and social media is enormous. There’s no doubt we’ll see Austral Flora Ballet shared worldwide in 2019. 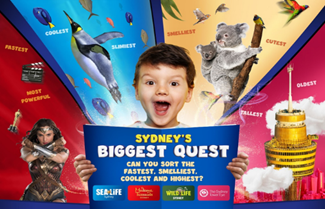