It’s huge. It’s the largest of mainland Australia’s viticultural regions, stretches about 150 kilometres east to west and 100 kilometres north to south, and therefore occupies some 15,000 square kilometres, or 1.5 million hectares.

By comparison, South Australia’s Coonawarra region is a shade over 5600 hectares, and some of the famous European regions virtually pocket handkerchiefs.

And it’s diverse, too, ranging from maritime land around Albany and Denmark to much more sub-continental regions around Mt Barker, Frankland River and the delightfully named Porongurup. 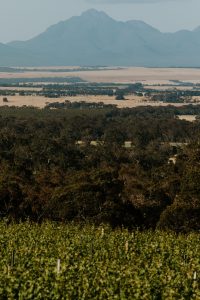 It’s the last of these I’m writing about today — an area of tall karri trees and spectacular wild flowers centred on a mountain range and national park east of the better known, in wine terms, Mr Barker.

One of Porongurup’s leading producers is Castle Rock Estate, established in the early 1980s by Angelo and Wendy Diletti, and named after a prominent nearby landmark.

The vineyard is cool and elevated and does well with classic northern European varieties such as riesling, chardonnay, cabernet sauvignon and pinot noir, though it turns out a pretty spiffy shiraz as well.

I especially like the rieslings and it’s easy to see why long established Australian regions with the variety — such as South Australia’s Clare and Eden Valleys — are looking west with concern.

Castle Rock Estate 2017 A&W Reserve Riesling ($35): Named after the vineyard’s founders, this crisp dry white is all about varietal purity, though Angelo’s and Wendy’s winemaking son Rob also uses some oenological magic to build the wine’s character. I like the savoury texture that he achieves in this potentially long-living wine, which I’d be matching with simple, grilled white-fleshed fish.

Castle Rock Estate 2017 Diletti Chardonnay ($30): This is the winery’s flagship chardonnay and a serious, complex dry white to boot. It’s the antithesis in style to the big, rich buttery wines that threatened to give the variety a bad name, and it shows all the delicacy and finesse that some from a cool, almost marginal climate. Continue the seafood theme but crank it up a notch in flavour with some lobster served with buttery sauce.

Shaw Vineyard Estate 2015 Cabernet Sauvignon ($32): This is a lean, sinewy dry red from the cool Murrumbateman area near Canberra. It’s been made with the help of Bateman’s Breath, a cool, late afternoon sea breeze that arrives from the direction of Batemans Bay and cools the vines. It shows lovely varietal blackcurrant and cedar notes that have had a firm oak home built. I’m a great fan of lamb and cabernet, and I see no point in diverging here.

Don’t lose too much sleep over daylight savings