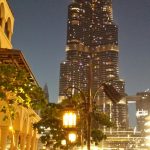 More than 2500 exhibitors and 40,000 industry professionals from 150 countries have arrived in Dubai to attend the Arabian Travel Market (ATM) 2019, the largest travel industry exhibition in the Middle East, which got under way yesterday at Dubai World Trade Centre. 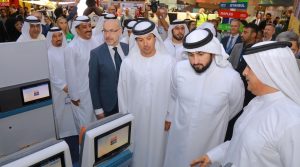 Delegates visiting Dubai for the first time, including me, were amazed on Saturday evening by the daily Dubai fountain show (the world’s tallest water-music spectacle). This takes place each evening, but those new to it find it a jaw-dropping spectacle, set against the backdrop of the Burj Khalifa, tallest building in the world, rising 828 metres with 161 storeys. The tower has remained the world’s tallest building (and the tallest man-made structure of any kind on earth) since its completion in January 2010. No lens can do it justice; some say nothing will ever surpass it. 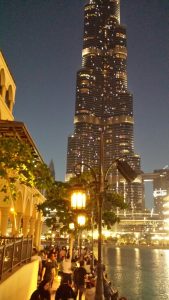 The Burj Khalifa, Dubai, on Saturday evening. Tallest building in the world, rising 828 metres with 161 floors

The Burj Khalifa lights up with a stunning light-show as the fountains play. A few days previously, the Burj Khalifa was illuminated in the colours of Sri Lanka’s flag, to show solidarity with the victims of the recent Easter Day attacks that struck Colombo.

A short stroll away is Dubai Mall (the world’s largest shopping mall) offering a phenomenal array of just about everything, along with restaurants of all varieties, Greek, Turkish, French, Italian, Japanese, you-name-it. 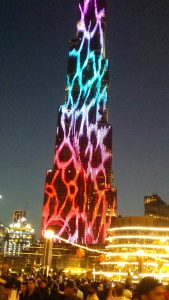 Giving easy access to all this, in the centre of Downtown Dubai, is Address Downtown hotel, towering 302 metres across 63 levels. Address Downtown’s 220 guest rooms and suites are equipped with high-speed wireless Internet, interactive TVs with Apple AirPlay devices, an entertainment interface, dressing areas with Hollywood mirrors and L-shaped sofa seating area. The marble bathrooms are fitted with dual sinks, a bathtub and a rain shower.