Peter Lehmann … behind the bar at the weight-bridge and serving a hoard of Barossans, many of them no doubt grapegrowers.

I remember many years ago attending a ‘small’ function of a couple of hundred people in the Barossa Valley house the late Peter Lehmann shared with his wife Margaret.

The food was hearty Barossan fare and the action centred on a huge kitchen, which they both insisted was the heart of that house. He and Margaret were like that and generous to a fault.

And they had lots of friends in the Barossa, many of them grapegrowers who supplied fruit to the Lehmanns, year in, year out, purely on the basis of a verbal agreement, reached over a handshake and probably a few glasses of port.

Both sides treated that agreement as gospel. Peter was like that. 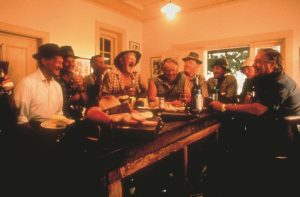 After all, Peter had set up his own winery, largely to buy the grapes he had vouched to buy, when a multi-national looked like leaving them in the lurch. Yes indeed, Peter was like that.

As an aside, I remember a group of well established wine writers attacking a junior member of their fraternity for being a bit loud after a glass too many of really good red.

Peter heard them, stepped in, and just said: “Those of you who have never had too much to drink can carry on, the rest of you shut up.”

The group of scribes became silent. Peter was like that, and covered himself with well-earned respect wherever he went, particularly in his beloved Barossa.

Peter Lehmann 2017 The Bond Shiraz ($25): This dry red celebrates the handshake agreement that the late Peter Lehmann had with many of his South Australian Barossa Valley growers, many of whom he treated as long-standing friends and figuratively broke bread with in his enormous kitchen. It’s rather a solid, old-fashioned dry red and deserves a really good chunk of solid, old-fashioned steak, grilled no more than medium-rare.

Chandon 2015 Vintage Brut ($35): Dan Buckle, Chandon’s Director of Winemaking, chose the potentially best blocks on his vines in Victoria’s high, cool Strathbogie and Whitlands regions as early as pruning time and treated them with due care. It shows in a stunning glass of fizz that exhibits a fine sliver of acidity and some delicate, but quite powerful fruit flavours. Treat it as aperitif or match for some really good oysters.

Robert Stein 2017 Reserve Chardonnay ($40): Jacob Stein has celebrated his tenth vintage at the family’s Mudgee vineyard by releasing a truly outstanding dry white laden with rich, powerful fruit flavours and layers of winemaking nuance. It shows some excellent stonefruit flavours balanced by fresh acidity. Drink it with a full-flavoured white-meat dish, made from say chicken or pork, and dressed with a rich sauce.

Pilots suspended after brawl breaks out in cockpit