Vinegar project helps Aussie farmer out of a fig jam 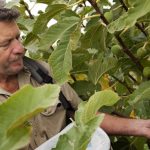 A Kangaroo Island farmer with more fresh figs than he can deal with is preparing for the commercial launch of Australia’s first genuine fig vinegar.

Dan Pattingale is on track to pick almost 15 tonnes of figs from about 300 trees in his Stokes Bay orchard this season – double the 7 tonnes harvested from the seven-year-old trees last year.

He is using at least five tonnes of the excess figs to make fig wine before turning it into fig wine vinegar, which he says will be an Australian and possibly a world first.

Pattingale said there were a few other fig vinegars on the market but they were grape vinegars infused with figs.

“But what I’m doing is making wine from the figs and then making vinegar from that so it’s going to be the genuine article rather than just an infusion,” he said.

“I wouldn’t say it reminds me of figs but it’s certainly a very fruity vinegar with a nice pale pink colour. It’s expensive to make it because the fruit is all hand harvested so it’s going to be a special vinegar for salads and dressings mainly. 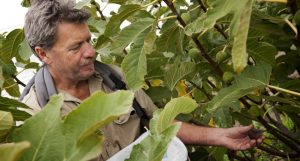 “It’s going to be a gourmet product and I’ll have to aim it at that market but I’m the only one making it in Australia – possibly the world – so I think there are enough people out there who want to try it at least so I’m pretty confident.”

A $34,000 grant last year through the South Australian Government’s Advanced Food Manufacturing Grants Program allowed Pattingale to enlist the help of researchers from the South Australian Research and Development Institute (SARDI) and University of Adelaide’s Waite Campus to delve into the science of fig wine and vinegar making.

The vinegar project has coincided with a bumper 2019 fig harvest that began in late February and is expected to continue until mid May.

“It’s about a 100 per cent increase on last year and we were totally unprepared for it so it’s been a bit frantic,” Pattingale said.

“We’ve picked about 11 tonne now and we’ve still got a month to go.

“I’ll probably do about 5 tonne in sticky figs and the rest of it is going into the vinegar project.”

The cooking, drying and packing of the Sticky Figs, pictured below and its bi-product Sticky Fig Syrup is all done on the farm, which still produces a small amount of olive oil.

Some of his olive processing equipment is also being used to press crush the figs during the winemaking process.

Pattingale only has the capacity to cook 150kg of fresh figs a day, causing a massive overrun during peak picking times when up to 600kg of fruit is harvested in a single day.

“I’ve bought a walk-in freezer which I’ve got 2.5 tonne in and I can’t fit any more figs in so I’ve had to start making the wine using the freshly picked figs,” he said.

“The wine I’m making now is quite a lot better than the early samples but the vinegar is the goal, there’s no doubt about that.

“We’re at the point where we know what we’re doing but we’ve just used the last few trials to iron it out a bit.

“Once the rush is over then we can start converting the wine into vinegar and I’m expecting to start making commercial vinegar in the next month.”

That process will involve building a bioreactor on the farm to convert the wine into vinegar. The conversion is done by introducing acetic acid bacteria and oxygen to the wine. The bacteria will consume the ethanol and convert it into acetic acid. 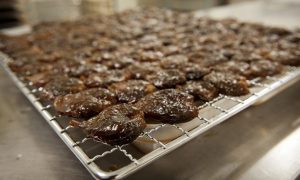 Pattingale said his fig wine had an alcohol volume of about 10 per cent and estimated he would end up with about 5000-litres of vinegar this year.

“It won’t take long to produce the vinegar so really it’s just a matter of packaging it and getting it out there and I think I‘ll be able to introduce it into all of my current outlets without any trouble,” he said.

“At this stage I still don’t have a product – I’ve got the wine so I’ve made a start – but until we set up the bioreactor and produce the vinegar I’m still guessing a bit so as far as final volumes go we just don’t really know yet.”

The vinegar is likely to be sold in 250ml bottles.

The Pattingales are aiming to launch their vinegar at the Kangaroo Island stall in the Adelaide Central Market in July and expect it to have national distribution.

The massive over supply of figs at the moment has forced the winemaking part of the operation into full swing. Pattingale said making the wine was a fairly simple process of crushing the fruit, adding the wine yeast and allowing it to ferment for three or four days before pressing out the wine.

“The wine I’m producing actually tastes better than the initial small sample of wine I tasted from the University of Adelaide and it does have quite a warming effect so I have to make sure I don’t try too much of it.

“I might keep a few bottles of the wine back for myself but at this stage I still think I’m better off to produce vinegar.”

Kangaroo Island is about 150km southwest of Adelaide, the South Australian capital, and is Australia’s third biggest offshore island behind Tasmania and Melville Island.

It has long been regarded as one of the world’s most pristine natural environments and is also known for its premium food and abundant wildlife.

The fig trees at the Stokes Bay orchard are all sourced from a 140-year-old tree still growing strongly at Snelling Beach about 15km west along Kangaroo Island’s North Coast Road.

“It’s definitely the sunny side of the street and we’re close to the coast.

“We’re right at the end of the Cygnet River Valley, which is relatively fertile soil for Kangaroo Island.

“We produce some great food over here but it’s not enough to say that you are from Kangaroo Island, you still have to produce a great product and that’s really important as that keeps the reputation up and it’s good for everyone then.” A Lush Resort, Mere Minutes from Landing in Phuket 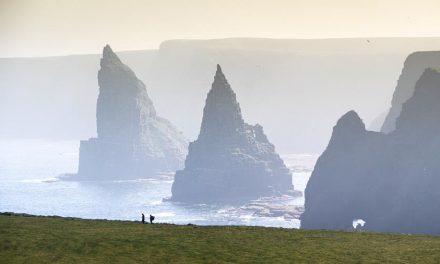