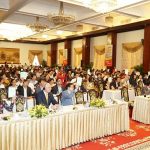 Following Vietjet Aviation Joint Stock Company’s Annual General Shareholders’ Meeting (AGM) held recently in Ho Chi Minh City, the new-age carrier announced that as at end 2018, the company continued to record high and sustainable growth across all targets, which had been set in the context of the national GDP reaching 7.08%.

In 2018, Vietjet’s air transport revenue reached VND33,779 billion (MYR6,011 million), an increase of 49.8% year-on-year, and 112.2% of its target. Air transport profit before tax increased by 48.9% year-on-year, while ancillary revenue reached VND8,410 billion (MYR1,496 million), a year-on-year increase of 53.5%. The proportion of ancillary revenue for total revenue also increased from 24.5% in 2017 to 25.4% in 2018 thanks to improving numbers of international transported passengers and the completion of SkyBoss ticket class in addition to diversifying of additional services, such as priority services, seat selection services, sky-shop on board, and more.

Vietjet also has a good track record of paying high dividends, maintaining the ratio of dividend payout at 50% per year. With the positive business results recorded in 2018, Vietjet’s shareholders decided to pay out 55% dividend in both cash and shares.

During the AGM, Mr. Donal Joseph Boylan was elected as an independent member of the Board of Directors for the 2017 – 2022 term. Mr. Boylan has more than 30 years of experience in the aviation and air financial industry, and has held executive and leadership roles at large institutions and listed companies both in Europe and Hong Kong. 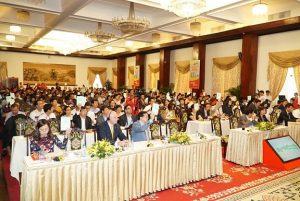 Vietjet’s 16 new aircraft boasts an average fleet age of only 2.82 years. In 2018, Vietjet also became the first carrier to operate the new generation aircraft A321neo, which saves up to 16% in fuel consumption, contributing to Vietjet’s reduction of total operating costs.

Last year, Vietjet transported over 23 million passengers across all flight networks and operated 118,923 flights with 261,000 safe operating hours. The airline’s load factor was recorded at 88.06% and its technical reliability rate reached 99.64%, which along with other safety indicators regarding flight operations and ground operations meant it was one of the leading airlines in the Asia Pacific. Its on-time performance (OTP) was 84.2%, which is over the global OTP average of 78.69%, according to IATA’s data.

In 2018, Vietjet continued to expand its international flight network while improving service quality with the aim of boosting foreign currency revenue from ticketing. In total, the airline opened one new domestic route and 22 new international routes last year. The airline also sought to increase ancillary revenue from additional services and maximize fuel cost advantages at a time when international fuel costs were lower than domestic fuel costs (due to tax, fee policies).

Vietjet also successfully retained IOSA International Air Safety Certification (only 8.6% of the world’s airlines have this certificate) and completed an evaluation according to ISO 27001 standards in 2018. During the same year Vietjet was awarded the highest ranking for safety with 7-stars by the international institution AirlineRatings.com.

By 31 December 2018, Vietjet employed a total of 3,850 staff from over 30 nations, all of whom will serve the airline’s international development strategy, an increase of 24.3% year on year. In 2018, Vietjet also trained 68 cadets who have now become pilots. 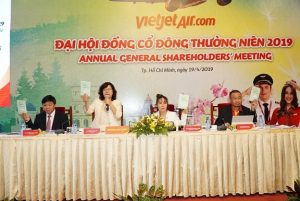 At the beginning of November 2018, Vietjet in partnership with Airbus, launched the Aviation Academy with a state-of-the-art flight simulator complex (Full Flight Simulator). The academy is EASA (European Aviation Safety Agency) approved and certified to European standards, while also meeting the world’s leading aviation standards. As of the end of last year, the flight simulator provided more than 910 training hours. The academy also conducted 924 courses for 21,611 trainees, including 157 pilot training courses, 127 cabin crew training courses and 128 engineer training courses and more.

Besides, Vietjet was also awarded many prestigious titles in 2018. Most notably, the new-age carrier was listed in the Top 50 airlines for healthy financing and operation by AirFinance Journal. Ranked 22nd overall, the airline was named ahead of many of the world’s most prestigious airlines.

In 2019, the new-age carrier plans to open 20 more international routes and transport nearly 28 million passengers. Vietjet expects to increase its air transport revenue to VND42,250 billion (MYR7,519 million) and air transport profit to VND3,800 billion (MYR676 million). To achieve this, the airline will continue to focus on international route expansion to promote foreign currency revenue from ticketing, while taking advantages of international fuel prices being lower than domestic fuel prices, and increasing ancillary revenue which has a higher profit margin in the high-income passenger segment.

The positive results recorded over the years and through 2018 will serve as a platform for the airline to meet growth expectations for 2019, reaffirming the company’s sound strategy to maintain momentum of growth and fulfil the airline’s vision of creating greater flying opportunities for people, supporting tourism development, bringing value, efficiency to investors, and continuing to be a safe, efficient regional and international carrier.

Immigration does not harm wages outcomes for Australians: CEDA