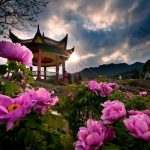 When it comes to the peony, many people may think of the period of theTang Dynasty (618–907) of China. A poem written by Liu Yuxi, a famous poet from the Tang Dynasty, reads, “Only the peony is really a national beauty with its bloom shocking the capital.” The peony is also hailed as the “King of Flowers” due to its large size and pleasant fragrance.

There are hundreds of varieties of peonies, among which the Landscape Peony grown in Dianjiang, Chongqing, China, is the most unique. The Ornamental Peony is mostly cultivated artificially, but the Landscape Peony, which grows naturally in the wild, is a decorative plant and is also well-known for its medicinal properties.

Dianjiang boasts a peony-planting history of nearly 2,000 years, beginning during the reign of Liu Che/Emperor Wu of Han Dynasty, hence some people call it the “Birthplace of Chinese Peony”. The unique climate and geological conditions of Dianjiang make it the most suitable place in Southwest China for peony to grow. The period from late March to early April of every year is the best time to appreciate the peony in Dianjiang, as well as Dianjiang Peony Culture Festival will be held every year at the same time. More than 60 species of peonies, covering an area of over 13.3 square kilometers, will bloom in the three most important scenic spots: Kaizhi Mountain Tourist Area, Huaxia Peony Garden, and Peony and Cherry Blossoms World. 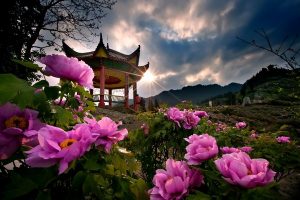 In addition to the famous Landscape Peony, Kaizhi Mountain Tourist Area is also full of exciting recreation facilities such as the “Spring of Shouting”, “Shaking Bridge”, “Rainbow Slideway” and others. Additionally, the “Stone-Ground Tofu” is a well known culinary specialty of Dianjiang. A process of 7 strict steps and a seasoning routine that involves 24 kinds of condimentsmakes this dish taste distinctive and allows it to boast qualities such as tenderness and glossiness. Certainly, Dianjiang County is worthy of traveling to for its landscapes, tourism attractions and delicious cuisine.

Chinese destination Sanya promotes its charm during roadshow in London