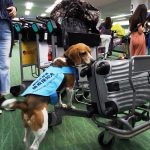 Japan’s Animal Quarantine Service (Head office in Yokohama, Kanagawa prefecture, AQS) is to strengthen its import inspections to detect meat and meat products in passenger’s carry-on luggage especially from Asia. AQS isolated infectious African Swine Fever (ASF) viruses from unheated sausages brought into Japan. ASF is a contagious disease affecting pigs and would lead to a serious production and economic loss, resulting in a devastating impact on the livestock industry. Recently, outbreaks have been recorded in East Asia.

In order to prevent the disease invasion, AQS inspect carry-on luggage with detector dogs focusing on flights from Asian countries affected by ASF. In addition, various measures such as poster announcements have been taken to discourage overseas visitors from bringing meat products into Japan. The message states that violators shall be punished with penal servitude for a term of up to three years or a fine of up to one million Japanese Yen, so as to deter the visitors from breaking the law. 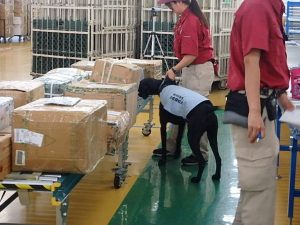 Considering that the ASF virus remains in existence in neighboring countries and the fact that the virus has been detected from meat products in passenger’s carry-on luggage on many occasions, it has become necessary to introduce stronger measures for further prevention.

In specific, persons who intend to carry meat products into Japan without declaring them will be served with a warning notice. The notice contains clauses concerning the related laws and regulations, and the fact such violator has to make a pledge to understand the provisions of the laws and ordinances, and never repeat illegal import of meat products again. Records of violations will be put into a database including the information of violators’ passport. Malicious cases, such as persons importing meat products repeatedly will be reported to the police, then may be prosecuted. 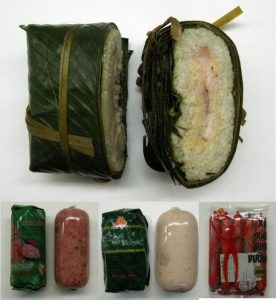 In its figures for 2017, the Service reported a cumulative 94,522 cases of travelers carrying goods in their luggage that were not approved for import, representing 119,113kg.